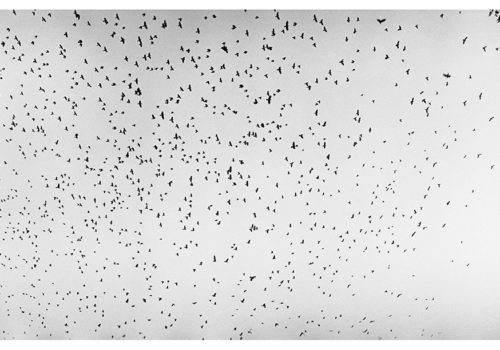 Already the title of the book is sublime Whatever You Say, Say Nothing!

This is the book by Gilles Peress. It’s an event.

Something rarely experienced. See the birth of a monument that will be in all libraries worthy of the name at the end of the year.

It has been awaited for almost 50 years, since that day in 1972 in Ireland that made history as Bloody Sunday.

Crazy work to follow a passion and give birth to a 10 kilog monument in 3 volumes.

This one combines with a rare intelligence: the subject, the testimony, the documentary fiction, the beauty of the photographs and the rare quality of the engraving.

It was with Gilles Peress that I did my first PHOTO report a century ago: an interview in Tuscany with Willy Fleckhaus, the legendary artistic director of Twen magazine. We later met in New York where we had found a nostalgic canteen: Pierre au Tunnel.

Like everyone else, I screamed at Gilles’ slowness to publish and distribute his images. And now, I understand: the strength of photography is to stop time, not to accelerate it!

Gilles Peress was born in France and studied political science and philosophy. The failures of 1968 in Paris, and the unbearable gap exposed between language – political, theoretical, and institutional – and reality, drove him to search for a new strategy for engaging with the world. In 1971, the camera became his intermediary, the tool he needed to process his relationship to reality and to keep his sanity.

Together with his friends and contemporaries Josef Koudelka and Raymond Depardon he pushed against the reductive reproduction of expected images that proliferated among Henri Cartier-Bresson’s imitators. His mature period began with the seminal book Telex Iran, which reset expectations for how photographs themselves in their construct as well as how photographic books could engage with a historical event like the Iranian Revolution. After Telex, Peress returned to Ireland throughout the 1980s to produce what has now become Whatever You Say, Say Nothing, the recently published, 1000 page narrative that Peter Galassi, Chief Curator of Photography at the Museum of Modern Art, described as having “the gripping immediacy and epic sweep of a novel by Tolstoy.”

Throughout the 1990s Peress devoted himself to extended explorations of the conflicts and genocides in Rwanda (The Silence) and the Balkans (Farewell to Bosnia; The Graves: Srebrenica and Vukovar), which evolved into Hate Thy Brother, a cycle of interlocking narratives in books and on walls. This period saw a further push into real-time installation, with shows at venues such as the Museum of Modern Art, the Pompidou, PS1 and the Corcoran happening nearly simultaneously with the conflicts they represented. In recent years, Peress has continued Hate Thy Brother by revisiting both archival work and the sites where it was made, and by extending the series to new locations, including Palestine and Israel.

Peress’s highly influential body of work intentionally lives in the no man’s land between art, documentary, history, law, film, paper, and walls, striving perpetually to fight against the banalities of expectation while reaffirming the value of visual language. As Susie Linfield writes in The Cruel Radiance, “The postmoderns and poststructuralists saw themselves as the heirs of Walter Benjamin, but his dialectical imagination eluded them: they never grasped his way of seeing. They could not understand that a photograph is objective and subjective, found and made, dead and alive, withholding and revealing…..But Peress could. His genius has been to accomplish just what the postmoderns couldn’t: to incorporate a critique of photography’s objectivity into that obstinate bit of bourgeois folklore formerly known as truth. He embraces postmodern skepticism, but uses it to enlarge photographic possibilities rather than to discredit the medium.”

The publication of Whatever You Say, Say Nothing marks the beginning of a major retrospective period in Peress’s career, which will revisit his work from Iran, the Balkans, Israel and Palestine, and his adopted hometown of New York.

Gilles Peress : Whatever You Say, Say Nothing

housed in a tote bag

Each Copy accompanied by Annals of the North

Latest articles of the category "Editorials"

Best Of November 2021 by Arthur Dayras

Best Of October 2021 by Sean Sheehan