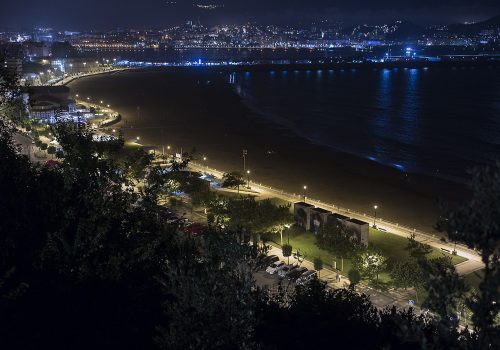 The fourteenth edition of the Getxo International Image Festival is being held from September 3 to 27; it will be the first orchestrated by Jon Uriarte, the new artistic director. Impressions and meeting.

The beautiful city of Biscay, the coastal satellite of Bilbao, is therefore welcoming for the fourteenth time works by artists from many countries, failing to be able to receive all the artists themselves due to the pandemic. The theme “in the street” chosen this year by the new curator offers the advantage of being completely linked to the troubles of our time and open to interpretations, which the artists considered were not deprived of; This theme is also illustrated this year by the fact that almost all of the exhibitions are outdoors, as is often the case in Getxo.

The impressive installation of giant tarpaulins on the seafront always has its effect. We find the affirmed desire to occupy public space during the festival and to settle as close as possible to the population. Michael Wolf, who died in 2019, who captured the loneliness of Tokyo metro travelers with a dark pictoriality, shares this space with Ilyes Griyeb, contrasting with these full-light portraits of workers in a Moroccan fruit farm, emblazoned with a mixture of traditional clothes as much as modern ones, a sartorial metaphor of a cultural superposition.

Sohei Nihino’s work is a sensitive and personal vision of the cities he has visited. Multiplying the shots during his wanderings, he reconstructs the shapes and geographies of places with his own feelings. At the end of a dantesque collage work that results in huge cartographic panels that had to be reduced into formats that could be exhibited, reminding us that, like a city, a work is first of all a construction.

Two young photographers, Thaddé Comar 27 years old and Felipe Romero Beltràn 28 years old, deal more specifically with the social theme linked to “the street” while avoiding complacency. The former spent two months immersed in the Hong Kong protests and produced a series that was much closer to the author’s documentary than to mere reporting. He highlights this in an aesthetic but never aesthetician way, all the technological means implemented by the police to fight against the uprising, as well as the inventive diversions imagined by the demonstrators, offering the viewer a timely perspective on the situation. A book is coming soon, it will be released at the end of October by Morel Books publishers in London.

With Reducción Felipe Romero Beltrán is inspired by the street police defense manual. Reproduced in the studio by extras who are none other than migrants simply dressed in costume pants and black shoes, the combat gestures and techniques become surrealist choreographies, which thanks to the shifting of the diversion make the original police documents almost crazy.

Lots of other things to see this year, brought to you by the ever-enthusiastic team and its director Jokin Aspuru: The visual correspondence during confinement of Raisa Galofre and Eva Gjaltema, on display at the getxo Post office. 3D (downloadable) Mexico City’s Independence Column by Julieta Gil, an iconic public space monument adorned on all sides with graffiti denouncing the insecurity of women in the country. See also “encounter” by Silvia Rosi and “La puente” by Charlotte Schmitz in the containers of puerto viejo; “Les intruses” by Randa Maroufi, George Georgiou and his Americans Parade, Agnieszka Sejud, Mentalgassi, The estampa group, Esther Hovers, the Fragmentin collective etc … find the complete program as well as the associated activities of the festival on the site – link here- below-.

New exhibition curator for Getxo photo for at least two years, this native of Hondarribia (Hondarribia, Guipuzcoa) is a photographer, teacher and digital art director at the Photographer’s Gallery in London, where he now lives. First and foremost interested in digital technology and online images, Jon is keen to maintain a link in the variety of his activities, one feeding the others. Since his own exhibition at Getxo photo in 2012 he has kept an eye on the Basque manifestation. His first thought as an exhibition curator was to observe what Getxo photo represented since its creation, and to realize that the festival has continued to bring photography to the streets of the city. The 2020 theme “in the street” is therefore to be considered first as a tribute to the festival, and then a reflection on what public space is, how it is used and what is visible there or not.

“The artistic world is not separate from social issues, they are related. Just as we are part of society, we are part of the problem and the solution ”.

A public space in the broad sense, not only physical but also on the net, to then select works by artists who talk about what is at stake.

It was difficult to make a choice among the many applications received for this year’s call for projects, but it is a very suitable tool for Getxo photo which remains a relatively flexible and open festival, which offers real opportunities for the up and coming photographers, and in which Jon Uriarte will endeavor to get the best again next year for his next edition.