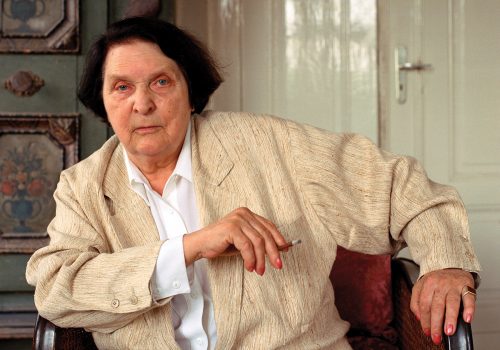 A landmark addition to the sacred memory of the Holocaust.

First published in 1992 to widespread acclaim, Rescuers: Portraits of Moral Courage in the Holocaust is a landmark addition to the sacred memory of the Holocaust. Featuring photograph portraits, archives and interviews, it was the first book (and exhibition) by Houston-born photographer Gay Block (born 1942); the exhibition has been seen in over 50 venues in the US and abroad, including the Museum of Modern Art, New York.

Block spent more than three years traveling in eight countries, accompanied by rabbi and author Malka Drucker, documenting testimonies from more than 100 rescuers—people who risked their lives to rescue Jewish victims from the Holocaust. The stories range from those who saved one life to those who worked in the resistance and saved thousands, always with the threat of death and torture if they were discovered. This new edition features a complete redesign and new foreword by scholar of Jewish American art Samantha Baskind.

Gay Block began her career as a portrait photographer in 1973 with portraits of her own affluent Jewish community in Houston, TX. The ever-widening expanse of her projects followed both family lines, in Camp Girls, and the Jewish community, in South Miami Beach. Her approach to portraiture is motivated by the desire to move beyond superficial representation, often making extensive audio and film recordings of conversations with her subjects. Block is as fascinated by exactly the way people tell their life stories as she is with exactly what they look like when she arrives to photograph them. Block’s multiple- award-winning short film about her mother, Bertha Alyce, has been shown in over 25 film festivals and is included with her book Bertha Alyce: Mother exPosed. Block’s photographs are included in museums and private collections throughout the United States, including the MFA Houston, MoMA, SFMOMA, and the Center for Creative Photography, Tucson. Her work is represented by Howard Greenberg in NYC.

Rabbi Malka Drucker is the author of twenty-two books, including the Southwest PEN award winner White Fire: A Portrait of Women Spiritual Leaders in America (Skylight Paths) and the New York Times Pick of the List’s Frida Kahlo (Bantam). Her most recent book is Embracing Wisdom: Soaring in the Second Half of Life. Based on the Roslans in Rescuers: Portraits of Moral Courage in the Holocaust, her book Jacob’s Rescue (Bantam), has sold nearly a million copies to children all over the world. Inspired by the glory of the human spirit demonstrated by the rescuers, she became a rabbi in 1998, and serves a congregation in Idyllwild, California.