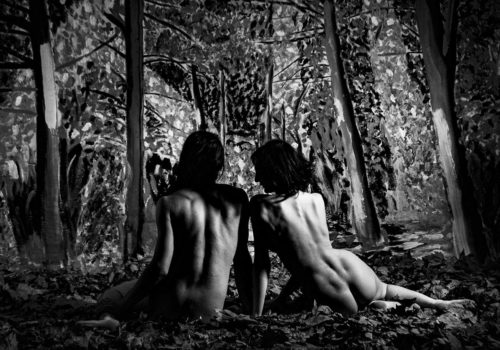 Galerie Gaïa presents the photographer and sculptor Alexandre Henry on the occasion of his exhibition “Nympheas”.

Alexandre Henry is an emerging photographer and sculptor who explores new theoretical and artistic temporalities. He will take over the space with a set of previously unseen photographs and sculptures. The “Water Lilies” exhibition is made up of three distinct series that takes a curious and attentive look at the power and beauty of women.

The theme | Nympheas
The Nymphs, (Gr. νύμφη) secondary divinities embodied the creative and productive activities of the living forces of nature, they haunted the waters, the woods and the mountains.
Daughters of Zeus or born from the drops of blood of Ouranos, their name gave rise to the term “nymphomania”, because they were renowned for their many sexual adventures. In fact, the myths frequently associate them with satyrs, hence a tendency towards fantasized hypersexuality.
Lovers of the gods, but usually mere mortals living for thousands of years, the carefree nymphs sing in the places they occupy. From their union with mortals were born heroes and demigods.

First series | Nympheas
Like a game between the nymph and him, they pursue and love each other. Later, maybe they will hate each other, or they will just have forgotten. He then continues his quest, guided by curiosity to decipher or tear apart the mystery that they inspire in him or that will make him suffer. Tired of rehashing memories, he continues his adventure with parts of him that will then be forgotten or dead, like naivety. Only his photographs attest to an era that is over, that of a happiness that is now extinct. Waiting to be found, he continues to advance among the nymphs.

Second series | The shadow of your dreams
“The shadow of your dreams” is a series in which Alexandre Henry projects a human form and not a landscape on a body. A body that has become decor for many, modeled by Man in his image or altered by him.
We can only see the extent of the destructive and harmful actions that humanity has been exercising on the planet for decades.
Time no longer leaves room for denial, only the sad contemplation of a painful reality remains…

Third series | The Cursed Book
This series aims to revisit key periods of the Old Testament. In this work, it is not so much religiosity that has aroused the artist’s interest, but more a possibility of using the Holy Book as a vehicle for a more contemporary reflection on the complexities and vices of the current humanity. After studying several passages of the Bible, he imagined, drew, built his own decorations while composing images according to a personal interpretation of certain passages. From the fall of Adam, to the exile of Cain forced to live on Earth with the weight of his conscience after having killed his brother, he was passionate about revisiting the great passages of this old epic poem of the world.