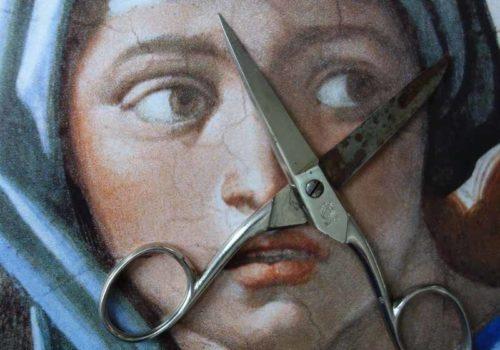 If the technique does not make the art, the anteriority does not necessarily make the artist. However, when a new vision emerges in a work long before society has appropriated it, it is sometimes useful to rethink its anteriority. This is the case for certain artists who are or have been part of the Gallery: Anna Blume but also Dany Leriche, Nancy Wilson Pajic and more specifically for this exhibition: Lydia Flem. “Artists are like drums,” she says, “and you don’t always hear them.”

The asymmetrical order of the world

“One autumn afternoon, I was playing with a black feathered mask, an old ivory thimble and, equipped with scissors, I cut out the outline of my hands on photocopies of two love letters exchanged by my parents, seeking to compose a kind of rebus around the mysteries of love and writing. Then, by some association of ideas, as in a dream, or on the analyst’s couch, I suddenly looked in my archives for my first notebooks, which I had kept since the 1960s. dismayed, from the first sentences, which the school imposed to the girls of the time to learn to read and write, trauma of an access to the French language and to the culture which were registered from the start, as evidence, with the color of discrimination:

Dad shaves in the morning, works in his office, drives his car, smokes while reading his newspaper, listens to the radio.

The most offensive, perhaps, was, in the margin, in capital letters and in red, underlined, the mention TB, very good. Chilling. I had to promise myself from that age that I would oppose this asymmetrical order of the world”. (1)

To be a painter and reverse your destiny

“The figure of Artemisia Gentileschi has become a symbol of the fight that women have been leading to conquer their rights to share the same humanity as those of men. Because the young girl abused, humiliated, and even tortured during the trial for rape, which lasted nine months, from March to November 1612, metamorphosed into one of the rare women painters of the 17th century, admitted, in 1616, to the prestigious Accademia delle Arti del Disegno in Florence. Artemisia reversed her destiny, she invented her own life. What she had always wanted, she became: an artist, free, mistress of herself, soon famous in all the courts of Europe, who through her work expressed the value and the creative power of women. »

The Femicide, a photographic series

“In 2016, with a pair of old scissors in my hand, it occurred to me to zigzag out a few advertisements for women praising luxury perfumes, then I put the scissors, a little rusty, on banal reproductions masterpieces of Western art history. I claim this banality of the form because it resonates with the banality of the content: this thousand-year-old mixture of the exaltation of feminine beauty and the violence that continues to be done to women because they are feminine beings. . This series, I called it “Femicide”, a legal concept born in Latin America, which here has become an aesthetic tool and device.” (2)

“Among the books in my library, I sought out the iconic faces that have celebrated the idealized beauty of women for centuries. I then found a modest pocket book bought during the Parisian exhibition of Artemisia Gentileschi. I recognized one of her most famous paintings, Susanna and the elders, painted around 1610. Out of curiosity, I reread a few pages of this little catalogue. The biblical figure of Susanna, Artemisia Gentileschi, had chosen to represent her with her own features. This tormented body, assaulted by two lustful figures was none other than a self-portrait. This very young pitturessa, a pupil of her own father, Orazio Gentileschi, who taught her the art of painting in the manner of Caravaggio, had just been raped in the studio of this same father, by a friend of the latter, also a painter, supposed to teach her the art of perspective. Agostino Tassi, renowned throughout Rome for his trompe-l’oeil frescoes, promised her marriage, cheated on her, and raped her. But Artemisia lacked neither the audacity nor the talent to dare to assert herself in the face of male domination. Above the body of the betrayed woman, she did not represent, as it is traditional to do, two old men, but only one, the other male figure had the dark curls of a young man, those of Agostino Tassi, her rapist. (1) »

A bit of terminology

In the text of a theatrical comedy by Paul Scarron, written in 1652, the word femicide appears for the first time. Used in the expression “doing femicide”, it translates into the desire expressed by a man to brutalize a woman. In France, the General Commission of Terminology and Neology, which works in conjunction with the French Academy, has recommended its usage in the field of law in 2014, with the meaning of “homicide of a woman, a young girl or a child because of her sex”. It entered the Le Robert dictionary in 2015: “murder of a woman, a girl, because of her sex”. However, it remained absent in 2019 from most dictionaries and in particular from the Trésor de la langue française and was not recognized that same year by the French Academy.

Artists outside the walls

-Jürgen Nefzger : hanging of the series “Bure or life in the woods” in the “Cellule de performance” exhibition at MABA / Nogent-sur-Marne. April 7 – July 17, 2022

“The Cellule de performance exhibition highlights groups that co-exist together and are united by a common objective, that of paying attention to others, to the world and its various human and non-human ecosystems. »
More info https://www.fondationdesartistes.fr/lieu/maba/

-Juliette Agnel : presence of the photographic series “Taharqua” in the exhibition “Pharaoh of the two lands, the African epic of the kings of Napata”. April 28-July 25, 2022
More info https://www.louvre.fr/en-ce-moment/expositions/pharaon-des-deux-terres