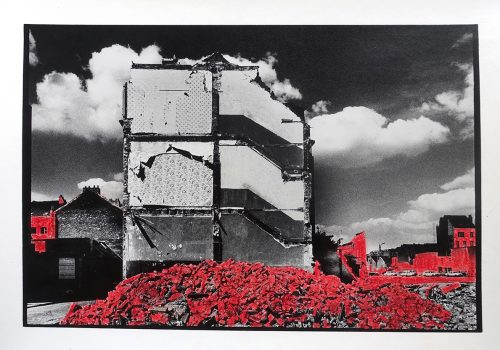 Anxious to distinguish photography among the many virtual art fairs, Photo Basel – international fair which is held each year in parallel to the Art Basel Fair -, puts online from December 7 to 12 an edition which is intended to be minimal and unfolds in two rooms: one dedicated to unique works, the other to works created in 2020.

The Dix9 Hélène Lacharmoise Gallery presents some of its artists in each of the viewing rooms which can also be seen in augmented reality.

Among the unique works is a photograph from Sebastian Riemer’s “Polaroïd” series, made from daguerreotypes from the mid-19th century. He thus gives new life to two revolutionary photographic techniques, both of which have fallen into oblivion. Downloaded from the Internet, these images refer to the debt owed by artists of the digital age to the rich tradition of analog photography, itself deeply indebted to painting.

Deidi von Schaewen magnifies views of buildings made with analogue camera, highlighting in red pencil certain elements of these gigantic “walls” of Brussels, Berlin or Paris.

With Louisa Marajo, photography becomes an object in “Pallet Sargassum” where a photograph of these Sargassum that pollute the Caribbean Sea is printed on aluminum.

Vincent Lemaire offers a diptych in which two images converge made of photograms (made with pieces of asphalt) on photographs of landscapes in Japan or the planet Mars.

The second viewing room, devoted to recent works, presents an example from Sebastian Riemer’s “Stills” series, the purpose of which is always to objectively reveal the time layers of the image while questioning the medium itself. The source image is here a slide – presented upside down as in the projection device – having served to illustrate art history lessons, and representing a work of art surrounded by its label and clearly made from a printed reproduction. The example here shows the detail of a work by Warhol.

Combining several images on the same file, Louisa Marajo offers in “Trace” a wall of pallets mixed with a view of the sea.