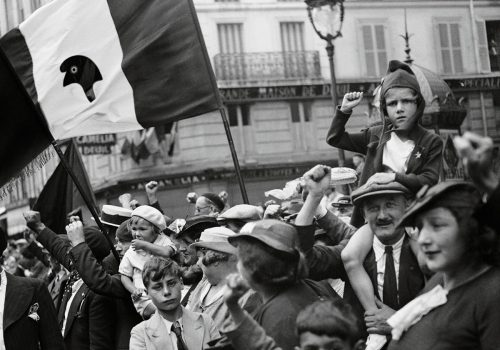 “My father ran a neighborhood portrait studio. Him, I liked very much, but I didn’t like his work at all. It was honorable work, which he did with his heart, with his naivety, but it was not my taste at all. When I was 16, he gave me a camera. I took pictures as an amateur, but it didn’t go any further.

I wanted to write music, not to be a performer. I would have preferred the piano, but my mother, who was very bossy, forced me to play the violin. She was a pianist, maybe she thought we were going to play together. I mainly wanted to compose and I did it a bit. But the result did not excite me. Then I left to do my military duty. When I returned, my sick father asked me to help him with his work. I went there reluctantly, but it was a question of economic survival. I was horribly bored for four years.

My father died in June 1936, and I ran away, abandoned the business to his creditors. What to do ? I was interested in reporting, I read magazines and I knew Capa. I started to roam the city and to photograph, and I never stopped. There, I knew I wanted to continue. This is how I took “my” cult photo, July 14, 1936. I experienced the Popular Front as a euphoric period. I was a man of the left and all of this transported me. But I did not join the Communist Party until 1945. I left it in 1965. I never had a very political head. My wife was more militant. ”

“I am often described as a humanist photographer, that suits me. I believe that my photos indeed show my interest in the human condition. Unpleasant things to look at, I don’t want to see them, let alone show them to others. I am a photographer of everyday life, of what you see walking around the city. I look at people, I want to photograph them and explore what their life has been like. ”

“My first meeting with Willy Ronis was, in 1984, when I arrived in Paris in the Ménilmontant district. Years later, we were neighbors, he rue de Lagny, and I Cours de Vincennes. With the help of several of his friends, I gathered about a hundred prints, from the first photos signed Roness, to the last shots of the 90s. Vintage or modern prints, made by him or with his printers, the exhibition retraces an extraordinary life and commitment with, in its sights: « La Liberté, encore et toujours… ».

Founder of the ARGENTIC gallery