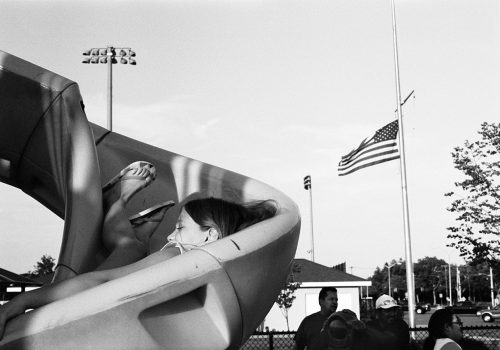 Five years ago, photographer and photo editor Justin O’Neill’s world was turned upside down when he and his wife separated after thirteen years of marriage. Shattered to the core, he turned to photography for guidance and therapy. After a few unsuccessful attempts and deadend subject matter, Justin set his attention to the most precious and significant thing in his life—his daughter Stella.

On Stellar Rays is a testament to a father and daughter navigating life with their new family dynamic. Through fifty striking black-and-white photographs, this collaboration represents the universal struggle of divided families in today’s complex world and how a child, a parent, and a camera can do so much more than document. They can mend and transform the most important relationships as well.

While there is no shortage of text-heavy how-to books on the subject of divorce, O’Neill’s account is the first in book form to broach the subject and discuss the healing process through photography. As foreword writer Madeline Lippman notes, “The beauty of Justin’s book is the collaborative creative process that takes him and his daughter, Stella, through grief and mourning to the beginnings of new possibility, from loss to wonder. They both grieve the threesome they knew as they explore a reorienting of who they are individually, in relation to each other, in relation to Stella’s mother, and in relation to the outer world.”

The profound emotional impact of these extraordinary photographs makes On Stellar Rays indispensable for those examining the effects of a family in crisis, including potential positive outcomes of a painful situation. Unique and evocative and with a preface included by photographer Elinor Carucci, O’Neill’s debut book is sure to cast a new light on the horizon of photography and brings into focus the problem, the explanation, and a solution that worked for one family, and will provide inspiration for many others.

April Fools’ Day 2015 for me was no joke: It marked the end of my thirteen-year marriage.

The foundation of my life—marriage, family, and love—felt like it was washed away in an instant. The week afterward I didn’t go into work, wandering around in a daze, unsure how I would ever recover.

I felt numb and incapable of making art. Family, friends, and therapy got me through that first year. A few photographer friends encouraged me to pick up my camera and channel some of what I was feeling into photographs. My first attempts were sentimental and a little embarrassing, such as shooting peonies, my now ex-wife’s favorite flower, whenever I encountered them. This kind of hopeless melancholy predictably ran its course, and then I turned my attention to where it always belonged—to our daughter Stella.

I decided to photograph Stella as a testament to our survival, together, sharing time with her mother, in our new dynamic. Over the course of three years (starting when Stella was seven), we collaborated, art directing and developing shoot concepts. We wove narratives with our newly developed visual discourse; we noticed reoccurring symbolic imagery and themes, such as swans, escapism, funny faces, being found, and ice cream vices.

We held each other up with pictures, reminding ourselves through the practice of making art that we are each other’s best collaborators, and the best of friends.

About the author and contributors:

JUSTIN O’NEILL is the Photo Director of Esquire and adjunct professor at The School of Visual Arts in New York. He earned his BFA degree in 1994 upon graduating from Purchase College. Justin’s photography is focused on the anthropological exploration of his family. He currently lives in Brooklyn Heights, New York, with his daughter, Stella.

MADELINE LIPPMAN is a clinical psychologist and psychoanalyst. She received her BA at Princeton University in English literature and creative writing, her first love. She went on to complete her PhD in clinical psychology at Adelphi and her postdoctoral training in psychoanalysis at New York University. Her areas of interest include loss and bereavement, young adult development, creativity, couple therapy, human sexuality, and integration of psychotherapy techniques. She is in private practice in New York City.

ELINOR CARUCCI was born 1971 in Jerusalem, Israel, and graduated in 1995 from Bezalel Academy of Arts and Design with a degree in photography and moved to New York that same year. Her work has been included in many solo and group exhibitions worldwide, including Edwynn Houk Gallery, Fifty One Fine, and MoMA, and has appeared in The New York Times Magazine, The New Yorker, and Aperture, among other publications. She was awarded the ICP Infinity Award in 2001, The Guggenheim Fellowship in 2002 and NYFA in 2010. Carucci has published three monographs to date: Closer (Chronicle Books; 2002), Diary of a Dancer (SteidlMack; 2005), and MOTHER (Prestel; 2013). She currently teaches at the graduate program of photography at School of Visual Arts and is represented by Edwynn Houk Gallery.

A Dad • A Daughter • A Divorce