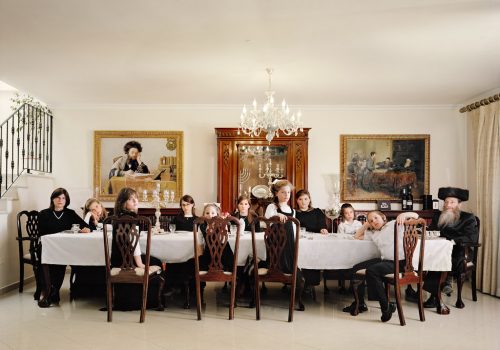 For the past 25 years, Frédéric Brenner has studied the Jewish diaspora in an attempt to answer the question: what does it mean to live with a portable identity? Winner of the 1983 Prix Niépce and the 1992 Villa Médicis Brenner has published seven books with Denoel, Abrams, HarperCollins and now Mack, traveling the world to explore the complexity of multiple and dissonant identities, an inititatory journey to reclaim the many threads which weave his identity. In 2003 he put together a two-volume visual anthology of the Jewish diaspora exploring a typology of acculturations titled “Diaspora: Terres natales de l’exil / Homelands in Exile” (HarperCollins/La Martinière), featuring one volume of photographs and the other with reactions by twenty thinkers, that Brenner have been in conversation with during his 25 years journey, including Jacques Derrida, Stanley Cavell and George Steiner. These read like a conversation that breaks from the overly symbolic image of what it means to be Jewish.

This same idea of sharing is at the heart of Brenner’s latest megaproject, This Place. Brenner didn’t set out to create an inventory, but rather to recontextualize Israel both as a place and a metaphor. The choice of form is resolutely poetic, and Brenner calls on contemporary artists who have invented their own grammar in order to approach Israel as a place of radical otherness. “We are all patchwork, and so shapeless and diverse in composition that each bit, each moment, plays its own game,” wrote Montaigne. “And there is more difference between us and ourselves than between us and anybody else.”

In 2007, consulting with his long time New York gallerist Howard Greenberg, Brenner invited five photographers from different linguistic and cultural backgrounds to participate in the project, including Josef Koudelka and Thomas Struth, with Brenner serving as the conductor. He organized an exploratory two-week mission to Israel so that the photographers, who had never been there except for one, could visit the country.

Once there, he invited local architects, psychoanalysts, archaeologists, social workers, writers and activists for an informal think tank in order to expose the photographers to the largest possible spectrum of narratives to get them totally confused, but on a higher level, in order to encourage the photographers to take a fragmented approach to this dissonant place. “People respond to Israel with their guts, and I hoped that some of the photographers, if not all of them, would dare not to connect the scattered dots that make up its DNA,” he said.

This first expedition was revealing. The next year, Jeff Rosenheim, of the Metropolitan Museum of Art, became the consulting curator on the project and helped identify six new photographers, including Jung-Jing Lee and Jeff Wall, who decided to only take a single picture. The team sought a poetic language to look beyond the dual perspective and understand the archaic stakes before it became political or religious. At the time, the project found a working title “Israel: portrait of a work in progress”. They spent more time doing field work, aided by a partnership with the Betsalel photography school in Jerusalem, during which 3rd- and 4th-year students—the future generation of Israeli photographers—assisted the photographers on the project who, in exchange, became their mentors.

A few years, meetings, curators and reinventions later, the project took its final form. It’s no longer a question of Israel, but of “This Place”. “Frederic, you wanted to create a group, and you created a group in the future,” said the filmmaker Nurith Aviv. The group, which Brenner only joined as a photographer in 2009, features twelve of the biggest names in contemporary photography: Wendy Ewald, Martin Kollar, Josef Koudelka, Jung Jin Lee, Gilles Peress, Fazal Sheikh, Stephen Shore, Rosalind Solomon, Thomas Struth, Jeff Wall and Nick Waplington. Mack Book is publishing 8 of the 12 resulting books, including the catalogue, and the digital version of all of them, and Charlotte Cotton took over as artistic director in 2012. The encyclopedic result is a group catalogue and a series of monographs from each photographer, published throughout the year by Mack, Xavier Barral/Aperture, Steidl and Phaidon. Martin Kollar’s Field Work and Josef Koudelka’s Wall came out in 2013. Frederic Brenner’s An Archeology of Fear and Desire was unveiled at Paris Photo Los Angeles in May, and Stephen Shore’s From Galilee to the Negev has just been released. This Place is an evolving catalogue that will be enriched in the coming months by the words of citizens across the world through a series of public events, roundtables and academic conferences, as well as an exhibition of 500 photographs revealing the singularity and complementary nature of the responses. “I am the vessel for a project which grew far beyond my understanding”, says Brenner. An opening will be held at the DOX Centre for Contemporary Art in Prague on October 24th, 2014.