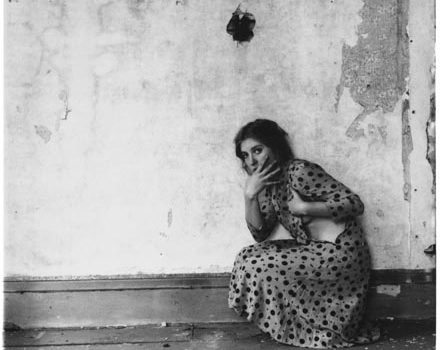 The disconcerting body of work left by this American photographer, who took her own life at 22, continues to inspire young art students across the world. The San Francisco Museum of Modern Art presents an exhibition of her work after two decades of silence.

Francesca Woodman’s photographs are ageless. This would no doubt have come as the highest compliment for an artist who liked to consider herself “timeless.” Through the deeply personal interrogations, the viewer is invited to witness the denuding of the artist’s private life. Woodman led an enigmatic existence that she never controlled , an existence that she finally chose to abandon. Her tragic end remains one of the beautiful, unsolved mysteries of contemporary photography.

Although Woodman was the principal subject of her photographs, they should not be viewed as mere exercises in self-indulgence. The outward simplicity of her self-portraits conceals the affront to a world that she sought to defy by her purity. As she pinches her bicep or crams her fist into her hip, Woodman, despite the apparent pride of her posture, seems to take revenge on the body she was given. By working in the classical tradition of nudes, Woodman casts aside any sense of obscenity in an attempt to understand the simplicities of pleasure and suffering.

Throughout self-examination, we see her answers overwhelmed by questions, clarity by obscurity, and wisdom by provocation. It is nonetheless legitimate to try and capture the symbolism of Woodman’s work. Whether in Providence or Rome, Woodman always lived in austere apartments, without shower or kitchen. These open spaces were conducive to abstract inspiration. The artist, eccentric, joyful, and deeply depressed only in the final weeks of her life, also kept a journal, which reads like a mixture of dark poetry and confessions of a literary addict. She left behind for future generations the image of an heroic figure, one whose narcissism is transcended by the sincerity of her vision.