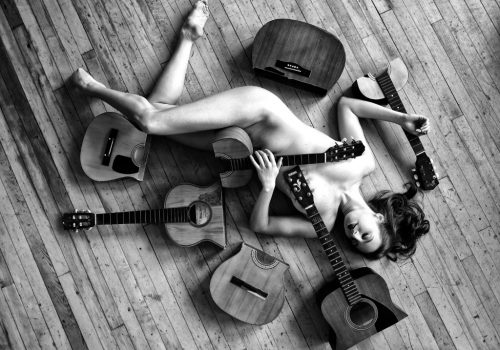 When I was a child, I had a crush on the Virgin Mary, or at least to her representation on a weathered piece of wood hanging in my aunt’s kitchen in rural Romania. I grew up among many religious icons – interpretations and representations of the Divine, but while crucifixions scared me, the image of Mary was reassuring; mysterious and beautiful, complex, vulnerable and strong – she was the archetypal girlfriend. I know, this might sound as weird as entertaining fantasies about the Statue of Liberty, but for a large part of my life I lived on a private planet infused mainly with the Feminine Spirit.

I also grew up in my father’s amateur photo lab set up in a bathroom in our working-class apartment in Bucharest. It seems that a lot of photographers have a similar story: a father, a dark room, a child, the magic of images. That improvised darkroom echoed the country where I grew up – a much larger dark room where lives were kept from developing their full potentials. Somewhere, there is proof of that: a photograph of me at the age of two trying to adjust the aperture on a Soviet made 35mm camera.

Eastern Europe was a place where, despite the atrocities of communism, everything was infused with religious imagery. Homes were filled with depictions of Biblical scenes. There was hope in all that, I guess. There was a sacredness and a mystery in icons. Somehow, the Virgin Mary simultaneously became my mother, my grandmother, my teacher, and my future lover. but throughout my life, men have been quiet, transitory presences. Their unreliability made me feel more comfortable and safe among women. my father, a quiet, unhappy man, held little mystery to me. Going into his photo lab had more with earning money than with poetry. My father put bread on the table. My mother brought poetry as dessert.

Over the years, my relationships with women preserved most of that initial awe. Women have always played a pivotal role in my life. I always found myself at ease and at home among them. I was raised and loved by women. To this day, I believe that beauty (spiritual and physical) is among the highest forms of Truth. To this day I believe that the complexities and contradictions of the Universe find refuge primarily in the feminine spirit. Go ahead, disagree a much as you want, but women seem to feel and know better. They are our manuals for living. The rest of us are just taking notes.

I know, this young century already seems to belong to the cynics, but I am a humanist and my tribe still has some ideals left. As an artist, the image of the Woman has appeared continuously in my work, from my early paintings to one of the main characters in my novel “Reliquary.” I don’t look at this as using women or books for fulfilling my artistic illusions, but rather as trying to better understand the world by listening to them and learning from their insight. Arguably, I am the man I am today because I was nourished by exceptional women.

I have lived in the United States for more than two decades now. For the past several years I have been focusing on images of American women. They have been patient and creative collaborators – essential for my art. Outside my obsessions, the world continued to be both beautiful and ugly, sublime and disgusting. Suicide bombers blew themselves up in public markets in the Middle East. The children of Aleppo starved as we kept watching the whole thing like a reality show.

In the middle of all that, was I wrong to want to emphasize the idea of Beauty as Truth? To talk about the vulnerability of humanity and the fragility of culture? Who knows? Could we accuse Matisse of detachment because he spent the war years painting odalisques in the South of France while the world was burning around him? We need Beauty in order to survive. Ultimately, even if I didn’t know it at the time, while working on these images, I wanted to make sure I would never lose the connections that helped me survive and grow all these years – my childhood’s sacred places: the Eternal Feminine and photography – all turned into nourishment for a life lived as an art form.