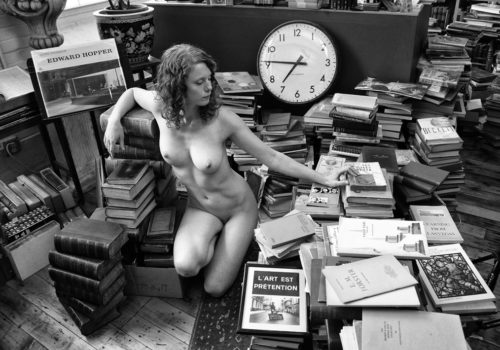 It all started with a visit to my friend G. J. Askins who has amassed an enormous amount of volumes in a well lit space carved out of an old mill in Northern Massachusetts. I have known him for years. He is a kind man, a rescuer, not a hoarder, a lover of books, art and good music. A pair of ancient wooden Santos hands was resting on a table nearby. I took them and placed them on an open book of black and white nude photographs. In the past I have explored in my work the juxtaposition of the real and the artificial, but this time it felt different – something new was about to happen.

That evening, I had a dream. The Bookstore, usually filled with sunshine, was immersed in a dark blue light. The Bookstore had no roof. It was raining, lightly. A woman was walking through the maze, browsing through the soggy books, asking for directions to (?) the Heathrow Airport.
A few days later I called Grover and told him that I wanted to do a photo shoot in his place. I told him that I would be done in a few hours. He agreed. We didn’t know that I would spend several years and take close to 30,000 photographs.

For the next several years he put up with me; Germaine – my friend and patient assistant; lots of containers filled with cameras; cables and lights. The lives of the wonderful women (somehow I dislike the term “models”) I had the privilege of working with were unknown to me at the time of the shooting sessions. In the process, I became friends with some of them. It took a particular type of courage on their part to collaborate and bring to life my ideas. Sometimes they read from the books they were browsing: fairy tales, poems, fragments from Nietzsche, Joyce, and even from cooking books. The tens of thousands of pages contained as much mystery and secrets as our relationships.

Many times while working on the project I questioned the validity of my pursuit. What was the point? Well, what is the point to any of our artistic endeavors? I thought of Borges, one of my favorite writers, who wrote reviews of books that didn’t exist. I thought of the deceiving absurdity of his travels and his passion for collecting books – both enhanced after he became blind. “I still continue pretending that I am not blind. I still buy books.” he says somewhere. The point after all, is to follow your obsessions, no matter how peculiar they seem in the beginning. Paraphrasing Mallarme, I could say that the world exists so that we may create works of art.

Borges was my companion during the many hours I worked on this project. I found myself exploring similar themes and obsessions. From the beginning, I aimed at a type of mystery (Borges refers to it as “magical ambiguity) where the viewer is invited to complete the image. The ideas of the labyrinth as a symbol for being lost in life and also as a structure deliberately built in order to confuse us, fascinated me. A longing for “order,” for a center, was always in my mind. Time (frozen with every click of my shutter release button) and blindness became enhancers of reality.
I thought of the fragility of beauty, at the confidence of the Body confronting Time. I looked at my own library and felt sad because I realized that all those books will outlive me. I thought that in order to read all the volumes in the Bookstore, one would have to be immortal. In the end, maybe that’s what I tried to achieve: remind people that books still matter and secure a form of immortality for my dreams.