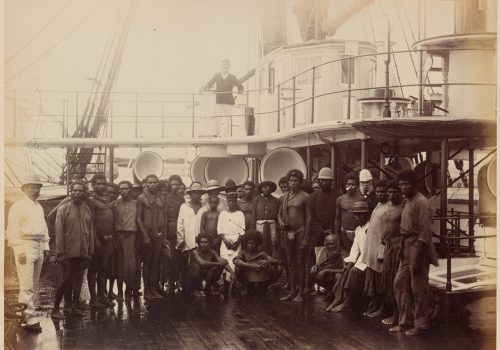 Ewbank’s are to offer an album of what are thought to be the first photographs ever taken in Papua New Guinea at their 30th Anniversary sale on March 20.

The 39 mounted prints chart the three-week tour by representatives of the Crown in November 1884 as they declared the British Protectorate over South Eastern New Guinea.

The views include native villages, panoramas, the armoured cruiser HMS Nelson anchored offshore and a series of formal ceremonies – both onboard and onshore – as the detachment made its way from Port Moresby along the coast.

As fascinating for their detail as their historical importance, the images show the British in their full ceremonial pomp, clearly in command of events, in stark contrast to the naked tribal chiefs who seem overawed by what is going on.

It raises the question as to how stage managed the photographs were in promoting the strength and superiority of the British as they offered the New Guineans the hand of protection.

Nowhere is this contrast more stark than in Plate 9, taken on board HMS Nelson in Hood Bay off Kerepunu, on November 18.

It shows tribal chiefs sitting cross-legged on the deck surrounded by the uniformed plenipotentionaries. Two of the chiefs can be seen grasping ebony sticks with Queen Victoria’s head on a silver florin affixed to the top, as a symbolic representation of their authority. The chief sitting on the left is Koepena, of the Aroma tribe.

The chiefs are looking up quizzically at Commodore James Elphinstone Erskine (1838-1911), of the Australian station (and later Admiral of the Fleet), in charge of the waters around Australia, who has just explained what the protectorate means.

Standing behind Erskine in a solar topee and long beard is William George Lawes (1839-1907), a missionary and the first permanent European resident of Papua who by that time had become an expert in the Motuan language, as well as a highly respected friend of the coastal tribes, and acted as translator here. A few years earlier, in 1878, he had interceded successfully in a dispute between Australian miners and the tribes and went on to publish the first book in a Papuan language.

As an invaluable adviser to the British, he dedicated himself to acting in native interests.

Although the exact identity of the photographer is unknown, it is likely that they were in the employ of the Sydney Morning Herald, whose correspondent, Charles Lyne, was covering the expedition and later wrote an account of it in New Guinea (Sampson Low, London, 1885). Nine of the photographs are original prints of illustrations in the book.

A complete album of the expedition, titled Proclamation of the British Protectorate over South Eastern New Guinea, 1884, was presented to the Royal Colonial Institute by Sir Saul Samuel KCMG CB (1820-1900) on behalf of The Government of New South Wales.

“It is rare to have such an exact record of places and dates, as well as being able to identify the main subjects, of photographs of this age,” says auctioneer Chris Ewbank.

“The album we have to offer appears to be a collection possibly taken from another presentation copy of these historic events, the first known photographs ever published of Papua.

“A truly fascinating consignment, the estimate of just £200-400 may reflect their market value, but doesn’t come close to their cultural and historical importance.”

Live online bidding is available via Ewbank’s website at www.ewbankauctions.co.uk