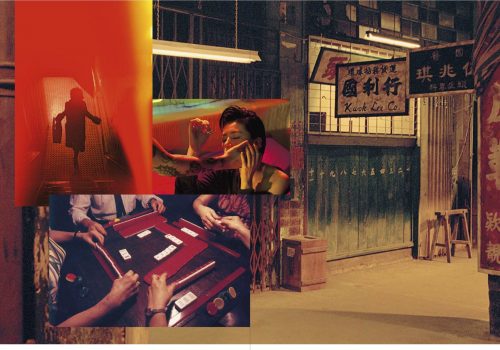 Published in the Fashion Eye collection by Louis Vuitton Editions, the book Shanghai by Wing Shya creates the impression of an oneiric film. The book brings together theatrical shots, production stills, street scenes, and sensuous images. As chaotic as it is traditional, Shanghai glitters and intoxicates. In the eyes of Wing Shya, Shanghai becomes a “dare-devil” city.

Wing Shya’s way of looking at Shanghai, and his photographic approach as a whole, bears an imprint of cinema. A collaborator of Wong Kar-Wai for nearly 20 years, Wing Shya photographed the solitary scenes in In the Mood for Love, the dilapidated interiors in Happy Together, and Eros, among others. From William Chang Suk-Ping, Wong Kar-Wai’s film editor and artistic director, he learned a creative method free of all constraints. William Chang Suk-Ping taught him how to “lend physical form to imagined concepts, and then continually modify and improve the result depending on the inspiration of the moment and what’s around you.”

This method makes it possible to bring out a form, an array of colors that make you want to dance. In his works, large swaths of color cover up and conceal people and imbue the scenes with certain melancholy. The color red stands out in particular—crimson, blood orange, muddy—and transforms the book into a film that’s in turn fiery and lascivious. The reader turns the pages as if to enter nighttime Shanghai and follow the parade of flattery, voluptuousness, and crass. Wing Shya’s Shanghai thus becomes both fluid and theatrical. The most contemporary colors transmit tender nostalgia of yesteryear. This is a city in which the biggest follies are committed leisurely.

“Blurry images stretch the imagination. When the public wonders why I wanted the image to be blurred, they engage in an interesting game,” playfully suggests Wing Shiya to the critic and editor Patrick Remy. For his photography is a game at the intersection of theater and cinema. This is true for instance of the frozen poses of his models. They seem sometimes surprised, sometimes made of wax, and their silhouettes and faces emanate invariable beauty.

Shanghai by Wing Shya is punctuated by a handful of more ordinary shots. We encounter urban landscapes half-framed in a window; scenes from everyday life, which foreground the lightheartedness of the local way of being. Shanghai appears both teeming with life and serene. “There is a great diversity, and yet all these differences come together in a feeling of conviviality.”

By photographing Shanghai in the aura of a street theater full of silky lightness, Wing Shya wanted to “portray touching beauty.” The city and his models blend together, elegant and gritty, demonic and fragile. The book successfully multiplies images without ever being weary on the eye. The volume takes on the form of a film forgotten in a corner of one’s desk. It’s as if one fed the film into a machine and faced, projected on the screen, the solitude, joy, and love of a city.