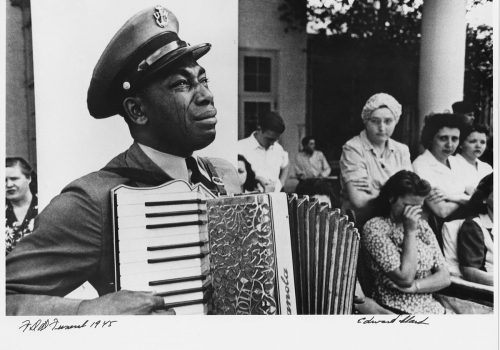 The photojournalist Ed Clark (1911-2000) has slipped below the radar despite having worked continuously from the 1930s to the early ‘60s. He worked primarily for Life magazine and, ironically, his all-round proficiency and prolificacy has eclipsed his achievement in showing how a part of America saw itself.

Editorial policy dictated his assignments but how stories came to be photographed was down to him. His empathies accorded with many of the readers who turned the pages of a magazine that was regularly selling six million copies a week throughout the 1950s. By the early 1960s, by which time 90% of readers had a television in their home, Life’s declining budget and his deteriorating eyesight brought Clark’s career to an end.

Born and brought up in Nashville, he became staff photographer for the regional newspaper, The Tennessean, and was inside the courthouse in Shelbyville in 1934 when it was besieged by a mob threatening to lynch a young black man. John Ford’s movie, The Sun Shines Bright, would depict an event like this but not for another two decades. Clarke’s dramatic shots of Shelbyville got him noticed and he became a stringer for Life, joining the staff a few years later.

Blatant, violence-backed racial discrimination in southern states did not go down well with Life’s largely white and middle class readership. He covered the disturbances in Little Rock Arkansas in 1957, when nine African American students attended the town’s racially segregated high school. Perhaps his most memorable photograph of this event is that of a white woman sobbing during the enforced integration. The tears could be those of jubilation but one senses this is not the case.

Clarke shows an awareness of how issues of race could stir emotions and one wonders whether, on his post-war assignment to western Europe, he wanted to provoke with his 1945 shot of an African-American soldier (at a time when the US Army itself was officially segregated along racial lines) dancing with a white French woman at Frisco’s nightclub, Pigalle, Paris. More generally, he photographed Paris like an American tourist: the Statue of Liberty replica on the Ĭle aux Cygnes; Notre-Dame; a flower market on Pont-au-Changes; a pavement artist in Montmartre.

Life’s liberalism did not insulate it from the Cold War and Clark was on duty to photograph demonstrators against Khrushchev’s visit to the UN in 1959. In these later years of his career, his well-established reputation gives him access to celebrities and politicians and the photographs become less interesting – Eisenhower changing ties on Inauguration Day; J. F. Kennedy at home with baby Caroline – and one turns back the pages of Ed Clark On Assignment for his earlier work when he captured everyday life: a blacksmith sharpening his tools in rural Tennessee with his daughter watching (mid-1930s); family farewells at Nashville’s Union Station as young men leave for military service (1942); a chain gang in Georgia (1943).

His best known shot from the 1940s is a close-up of an African-American Navy bandsman playing an accordion, tears streaming down his face. The funeral train with the body of Franklin Roosevelt is about to depart from Warm Springs, Georgia (April 1945). Clark had driven for over five hours from his home the night before to be there in time. His photograph was taken to represent a country’s united sorrow and it filled an entire page in Life. It was how the magazine imagined a unified America, a healed nation, racially at one in its grief. (The following year would see the lynching of four African Americans by a mob of white men in Georgia.)