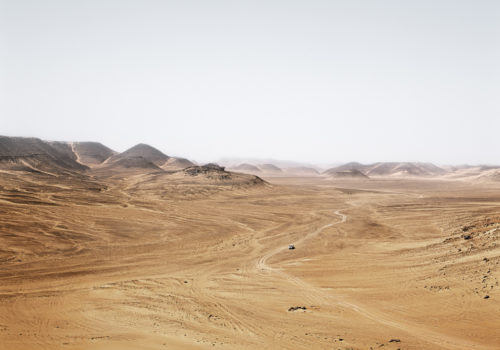 Every year we pride ourselves at EAST WING to present wonderful new work by very strong artists who have something special to say.

In my choices I have the work from Swiss born Photographer Philippe Dudouit and his series the “Dynamics of Dust” and the piece is called “Cocaine Highway“. This work have been a long time project.The Saharan cocaine highways are the focus of Dudouit’s recent explorations, are located between Tora Bora and the Salvador Pass, using in particular the laterite road built in the 1940s. The road – now called ‘Colonial road’ – runs along the borders between Algeria, Niger and Libya, which are still disputed by each nation ever since the decolonization. This road segment is only travelled by specialized smugglers, and more recently by Jihadists on their way between Northern Mali and Libya. Thus, in one of history’s typical ironic twists, today’s activities are enabled through a road originally created by and for colonialist interests, which now backfire on the former occupying nations by providing one of the main routes to their doorstep for drugs, Islamist violence and asylum seekers.

My other equally strong choice would be from the series “Absent Portraits” by Philipp Toledano. His work is not only conceptual but also political work , in this series , it is all about censorship or if you will the “portrait” of censorship, the images were taken from censored packages of consumer goods from Iran, however what is very interesting is that , the censorship issue is not limited to Iran only , but take place in many countries and in many forms, so these portraits represent the portrait of an ideology, of a belief system, religious, moral, political, and I find this work is quite strong and love the esthetic .

My last choice would be the work of Martin Roemers and his series “Metropolis” a striking series of images taken of mega cities from all over the world, I like many of the photographers like Martin who work on this colossal projects, both in content and in execution, there is so much to say about the state of our living on the planet today.