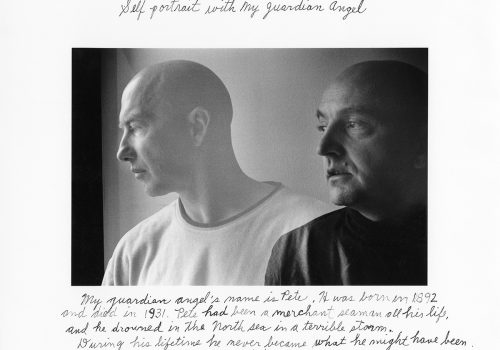 Coinciding with the Morgan Library & Museum’s expansive retrospective The Illusions of the Photographer: Duane Michals at the Morgan (through February 2, 2020), Duane Michals: Mischievous Eye highlights the artist’s wide-ranging curiosity and irreverent spirit with several groupings of recent works as well as selected vintage prints. In this fifth solo outing with DC Moore, Michals’ painted photographs, sequences, and self-portraits share center stage, showcasing his interest in the comical, metaphysical and surreal.

The sequenced and augmented works highlight how Michals has long chafed at the idea of the sacrosanctity of a single perfect photograph. For one series, Michals, now 87, turned his attention to glamorous studio portraits of Hollywood actors he grew up with, as a way to examine the transience of identity. Using found photographs of Ava Gardner, Elizabeth Taylor, Joan Crawford, Cary Grant, and Judy Garland, among others, Michals paints their names on the photo — harkening back to Michals’ early use of hand-applied text on his gelatin silver prints. Here, however, his tongue-in-cheek approach to the painted photograph undercuts the posed glamor by inserting the names in playful puns. Though jovial at first glance, there is an underlying question of the self that traces through these works. By going back to icons of his youth, Michals is remembering how images of these actors resonated during their time, while pondering the ephemerality of the photograph and identities they try to capture.

In addition to his newest work, this exhibition features examples of Michals’ earlier black and white photography, painted photographs and altered tintypes. The anonymity of the sitters in found vintage tintypes allowed Michals’ to transform the often stern portraits through his use of vibrant oil paint in comic embellishment. He transforms a static image into a teasing, playfully expressive representation of the subject, at times assigning an entirely new persona to the sitter. Nora Barnacle (2012), for example, represents the muse and wife of author James Joyce, and Anna Akhmatova (2013), the famed 20th-century Russian poet. While risking critique by openly disfiguring the portraits, these works offer a way for Michals to be adventurous by utilizing painting to destabilize how identity was reflected in photography.

Among Michals new photographs are insightful and sharply witty self-portraits meditating on the temporality of the body, the self and his own existence. Michals has always been especially influenced by Surrealist painters, such as Giorgio di Chirico, Balthus, and René Magritte, all of whom he photographed. Peephole Portrait (2019) immediately recalls surrealism in its composition — a hand holds a gilded frame with a wood backing in front of Michals’ face, with a hole only large enough to see his eye peeking through. It’s a mischievous play on visibility and concealment. Taxidermied Duane on Permanent Display in a Shop Window (2017) is a sequence of four-color photographs with hand-applied text. The first two photographs document the physical setup of a shop window in New York City with a camera as well as a stuffed deer and rabbit. The following two photos reveal Michals being lifted into a chair in the window and then stiffly sitting between the animals with a top hat and a wand-like instrument topped by a star. The sequence is an amusing and sly critique of the desire to preserve the body forever. These are joined by earlier black-and-white photographs with hand-applied texts such as Self-Portrait with my Guardian Angel (1974) and Self-Portrait as if I Were Dead (1968), two pensive examples of Michals’ long-standing interest in the expressive exploration of the self and the passage of time.