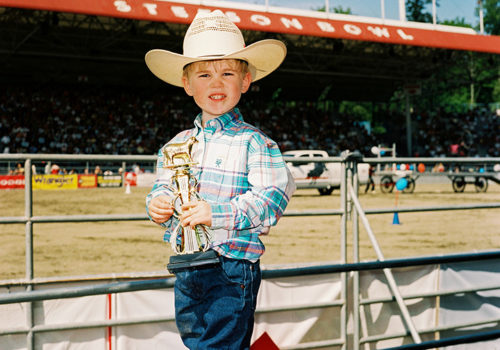 Dina Goldstein began her career 30 years ago as a photojournalist, evolving from a documentary and editorial photographer into an independent artist focusing on large-scale productions of narrative photography tableaux.

Goldstein’s work has been the subject of academic essays and dissertations and has been covered extensively in media around the globe. In 2015, she was awarded the Prix Virginia, an International Prize for Women, inviting her to exhibit in Paris.

Goldstein began her photography career in 1990. Surrounded by artists, musicians and writers, she convinced her creative friends to become the subjects of her early experimentations with photography. Her roommate, David, became her first muse, this resulted in a long term collaboration on the series DAVID. The works are made up of performative moments and archetypal characters that upend the traditional male artist/female muse assemblage.

Portrait photography predominated the start of Goldstein’s career, however she felt that photojournalism was her true calling. She planned to follow in the the footsteps of her heroes, and pioneers of documentary photography Dorothea Lange, Margaret Bourke White and Diane Arbus. Through photographic portraiture and editorial documentation, these artists brought an empathetic eye to the world’s most marginalized, highlighting the importance of documenting the human condition in all of its forms.

Rarely seen without her camera, she prolifically photographed concerts, protests, parades, and anything that caught her eye. One of Goldstein’s first assignments was documenting Palestinians living in poverty in the occupied territories of Gaza and the Westbank in Israel. Here, she got her first taste of photojournalism in a conflict zone when she was caught in the middle of a rock fight between Jewish Orthodox settlers and Palestinians. This experience was life changing for Dina. Newly married, and back in Vancouver, she decided to focus on editorial work with newspapers and publications. She was soon commissioned by prestigious magazines around the world to photograph multi-page spreads and cover images.

The ARCHIVE includes early portraits, documentary, stage performances, street and travel works from this decade. Many of the pieces were printed within a year of and are considered rare.

At the beginning of this decade Goldstein was assigned to document New York City directly after the 911 attack. The ARCHIVE includes images captured in the city and around the epicentre of Ground Zero.

She increasingly focused on personal long-term projects like Trackrecord (2002-2004), documenting gamblers from Hastings Park racetrack in Vancouver, British Columbia. The portraits revealed the idiosyncratic beauty of these people, whose great obsession was betting on horses races. These vivid large format portraits were exhibited to acclaim at the Pendulum Gallery in Vancouver in 2004, this series is included in ARCHIVE.

Goldstein’s main tools as a photographer were simple: a 35mm Nikon and a Fuji GA, medium format rangefinder. She would use these to document her travels, and to photograph subjects with natural light and studio strobes. The digital age was growing exponentially, and in the mid 2000s Goldstein joined the revolution with a high-end SLR camera. Digital technologies simplified and democratized photography, and suddenly those without photography experience were able to shoot photos that, while not professional quality, were considered useable by art and photo editors. Evolving with this sea change in the industry, Goldstein realized that she had to push her creative muscle in order to stay relevant. Towards the end of the decade, Goldstein was pursuing big budget advertising campaigns, stepping into the male-dominated field of advertising photography. By now, Dina had two young daughters, and thanks to the support of filmmaker husband Jonas Quastel, she was able to continue bringing her nuanced distinct vision, casting skills and technical expertise to assignments and commissions.

In 2010 Goldstein opened up her studio in Vancouver where she showed XX, a retrospective exhibit to celebrate 20 years of photography, featuring 20 pivotal pieces, representing her growth as an artist.

The move to staged photography was unexpected and inspired by personal events. Jordan, Goldstein’s eldest daughter was, like so many girls, obsessed with Disney princesses. Around the same time, Goldstein’s mother was diagnosed with breast cancer. The diagnosis was painfully antithetical to the myth of “happily ever after,” and Goldstein questioned whether many fairy tales were dangerously misleading for children and teens. This cultural disconnect inspired her next photography initiative

Fallen Princesses (2007-2009), spinning new narratives that put these mythical figures into situations where they encountered authentic human struggles. The series is included in school age textbooks, is the subject of academic papers and articles, is frequently exhibited internationally, and considered Goldstein’s seminal, most recognized works.

Goldstein developed a pre-post production methodology, much like film making or theatre; with crew and cast, makeup and costumes. Now photographing with a medium format digital Hasselblad so that every detail can be uncovered and interpreted. The images coming alive within the tableaux setting, reminiscent of Baroque paintings, dripping with irony, metaphor and satire. She continued to explore this form of expression with critical thinking and social commentary in her next few series:

The 10 Commandments (2019). Note that the works in the ARCHIVE precede these large-scale projects, which are in editions and therefore not included.

During this decade Dina Goldstein was awarded an Arte Laguna residency and traveled to Mumbai, India. She was invited to participate and exhibit internationally at several Art and Photography Festivals and Biennales. She traveled to China, Taiwan, Korea, Colombia, New Zealand, Australia, Canada, USA, Italy, Poland, France and England. In 2015 Goldstein was selected as the overall winner of the Prix Virginia, an international Photography Prize for Women based in Paris, France.

Photographed on the beaches of her home town, Vancouver Beaches, 2016 was printed by French publisher Be Poles for the collection Portraits De Villes ‘Vancouver’ and includes portraits made at the infamous nudist beach Wreck Beach. Selections from this series are included in the ARCHIVE.

Goldstein continues to document the vernacular with her camera, focusing on the notorious DTES, the poorest neighbourhood in Canada, struck by drug and alcohol addiction, and a mental health crisis. Her most recent work, also included in the ARCHIVE, examines the effects of the Corona virus Covid19 on society, and within the vulnerable communities of Vancouver.

Working tirelessly and safely throughout the global pandemic at the Bunker studio, Dina Goldstein along with several assistants, compiled a database of over 2000 images. They collected vintage prints, scanned negatives, custom printed, stamped and packaged selected small works for the ARCHIVE. The collection of prints ranges from photographs of musicians performing on stage to portraits of famous faces, candid documentary style travel and series, as well as street photography.