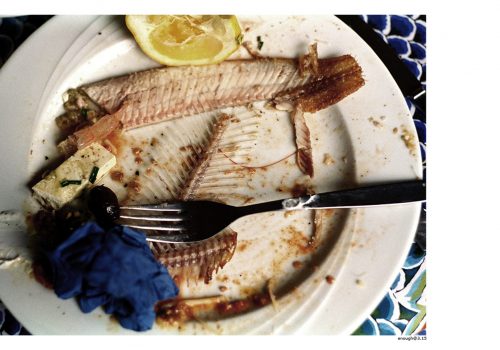 Denis Piel has just published 3 books in quick succession on his photographic work.

Two weeks ago, we presented Exposed ; today it’s Platescapes, an hymn to food!

The reason for this craze: France probably.

In 2001, Denis witnessed the destruction of the World Trade Center, which hosted the office of the company where he worked at the time. The following year, he moved with his wife and son to the southwest of France to live in the renaissance Château de Padiès, built over a medieval 12th century castle and which they have been restoring since 1992.

This place is therefore both their home and the public site of the “Gardens of the Château de Padiès”.

“The world in which a man lives shapes itself chiefly by the way in which he looks at it” Schopenhauer, and this is how I look at this period of my life. – Denis Piel

One great gift offered as a photographer nurtured by Vogue was to stay in some of the most luxurious resorts and hotels in the world and eat in the very best restaurants. Piel’s beloved French grandparents had already cultivated his love of fine food, and he relished the experiences that his profession offered him.

Piel’s preoccupation with food has found expression across many forms, from the evolving photographic series PLATESCAPES to Les Jardins du Château de Padiès, the permaculture garden and farm run by his family.

Drawing upon a ten-year period, from 1985 to 1995, Piel presents a selection of photographs and transcribed audio recordings from PLATESCAPES alongside biographical photographs, personal writing and recipes.

We eat; the need to eat is a leveller, it binds us together, and it makes us dependent upon the natural world. It is one of the few experiences common to all of us regardless of location or time, from a St Barts fisherman to a prominent Parisian intellectual.

A meal is a cultural expression; food is a celebration; food is consolation; a plate becomes a tool of psychoanalysis; a restaurant is theatre; the table is a stage; the restaurant scene is terra-incognita to be explored; favourite restaurants are destinations; his young son is a new explorer in this culinary world; a favourite recipe is a mnemonic which holds a memory of a person or time; and ultimately, a home-cooked meal for another is a token of love and connection.

During these years Piel met the woman who was to become his wife, Elaine Merkus, and with whom he would have a son, Olivier. Relocating to the South-West of France they renovated Château de Padiès and developed Les Jardins du Château de Padiès, where Olivier has developed and produces some of the finest organic products and produce in the region.

At the heart of this book lies the sheer joy and consolation in the transient, ephemeral nature of coming together to enjoy a meal.