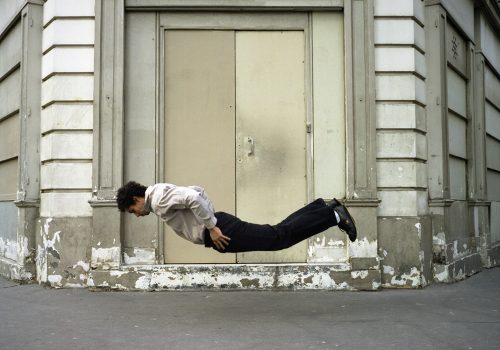 Since the mid-1990s, Denis Darzacq has been developing personal work. From press photography, which, like other French photographers of his generation, was the cradle of his artistic practice, he kept above all a keen eye on contemporary society and a method. Denis Darzacq has become convinced that a constructed image can serve his analysis of society more effectively. Since 2003, he has used staging. By their state or their pose, the staged bodies upset the established order, without ever tipping the image into the spectacular.

The book retraces the journey of Denis Darzacq who present photographs extracted from major series. In particular The Fall and Hyper which oppose two realities without digital manipulation, Act and Act II which invite reflection on the complexity of the individual, beyond the assigned and reducing status of disabled persons. Finally, Recomposition and Counterforms make the body disappear over the course of the photographs to give way to an artist’s reflection on abstraction.

Born in 1961, Denis Darzacq lives and works in Paris. A graduate of the National School of Decorative Arts in 1986, he began photography following the French rock scene and also became a still photographer. From 1989, he collaborated regularly with the daily Liberation and more generally with the national press, before moving in the mid-1990s towards a more personal photography. He became a member of the VU agency in 1997. Regularly exhibited, awarded prestigious prices (Altadis Prize in 2000, World Press Photo in 2007, Niépce Prize in 2012), his photographs have entered many public and private collections.

Researcher and art critic, lecturer at Paris 1 Panthéon-Sorbonne University and deputy director of the Department of Plastic Arts and Art Sciences (UFR 04). She is also an exhibition curator.

Director of FRAC Bretagne since July 2019, he is also director of Passerelle Center for Contemporary Art in Brest.

President of MATMUT since 2015.

work co-published with the Matmut foundation

with texts by Françoise Docquiert and Étienne Bernard