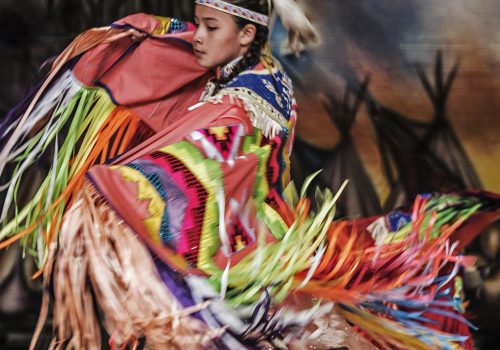 Deborah Anderson is a multi-talented artist, living in Colorado. She grew up in a musical family and as a singer and songwriter, signed with Mo’ Wax on her debut solo. Her solo album, Silence, was released in 2009. This album accompanies her photographic series and the accompanying book, Paperthin, published by Verlhac Editions,. She is an award–winning filmmaker and photographer working for a variety of magazines and clients, as well as directing music and short videos, and documentary films.

Her latest work, Women of the White Buffalo, follows the women of the Lakota tribe in South Dakota. The photographic exhibition opened in Los Angeles at the Leica Gallery, and the award-winning feature length documentary is slated for a Fall 2020 release. This film has won seven awards, inclusive of the Best Feature Documentary at the 24th Red Nation International Film Festival and Best Director of a Feature Documentary at the Los Angeles Independent Film Awards.

Q : How did you find your subject for the photography and this award–winning documentary film production, “Women of the White Buffalo?”

Anderson : After meeting with Paris to speak about the Leica Gallery show in LA, she understood I wanted to create a new body of work that would be empowering and inspiring to those that would get to see it. I felt immense support from her in choosing a subject that felt to be worlds apart from all the work I had done thus far in the arena of celebrities. Yet I have always had a fascination around Indigenous cultures as I am part West Indian, the original area where Christopher Columbus was first discovered by the Arawak Indians, so my desire to delve into the world of the American Indian resonated deeply.

I had been working with Kate Vmeer, a medicine woman out of Sedona, and spoke to her of my desire to visit the Indian reservations due to the current circumstances of the Native women being murdered or going missing without any accurate data. I wanted to see for myself what it was to be a modern-day Native living on these reservations as I knew through my work as a photographer and film maker I could be a bridge for their stories to be witnessed by people that have no idea of what is really going on there.

Kate eagerly introduced me to Kumiko Hayashi, a young film maker with connections to many families on the Pine Ridge Indian Reservation. Kumiko jumped on board when I told her I wanted to document the lives of the women, knowing how important the stories were and how they needed to be shared, she introduced me to a revered Lakota Elder, Carol Iron Rope Herrera and it was she who invited me into the fold.

Q : What was your creative process;  the research & preparation, selecting your subjects and the challenges?

Anderson : I had done extensive homework, reading as much information on the real history of America along with watching documentaries and archival news reels. I saw that nobody had really focused solely on the women within the Native cultures in America, the lost matriarchal understanding nor how these women continue to be the backbone of their tribes in so many ways. Carol Iron Rope Herrera told me she would be willing to introduce me to other women that wanted to share their stories as they knew it was time as they had prayed for this opportunity to be heard by a wider audience.

Q : What was essential information in forming an understanding of their story, and how you came about visualizing this?

Anderson : I felt incredibly blessed to have been supported at the inception of this work by another wonderful artist and philanthropist, Lekha Singh, who was the first to donate money towards the making of this important project. With her first donation I was able to go to the reservation with my team of four incredibly dedicated individuals for 2 months and begin this powerful journey. I knew I wanted to find 8 women ranging in age to speak of their daily lives, their history and the challenges they face in stepping into a brighter future. With that, Carol made the necessary introductions in the first 2 weeks of my stay before we started to film and in that time I was given the opportunity to hear the truth behind any misconceptions regarding the lives of the Native women living in one of the poorest counties in America.

Q : What is your favorite story/moment when collaborating with the “Women of the White Buffalo?”

Anderson : The entire journey has been a very humbling experience for me. Every day, when on the reservation, was started with the people we would interview by doing a prayer in Lakota as they burnt sage and gave thanks every night for the opportunity to witness their lives. At the beginning I was asked to speak in a Native American Church meeting as the elders wanted to know what my intensions were. I will say I was incredibly nervous, however when I started to speak and looked at the men and women that were questioning me, I could see the thousands of years of history in their eyes. It moved me to tears. When I closed my eyes and I heard the sound of the water drum being played, it was as though the trailer I was standing in morphed into a large buffalo hide tipi and the people present in the room were wearing their native regalia of feathers and skins. Their spirits are very powerful, and I was truly given a gift by being there that day.

Q : For this series you are the still photographer and  film director, explain your process of doing both?

Anderson : There were days that I felt overwhelmed taking on the task of both Director and Photographer as both, in the situation, felt to be worlds apart. Sitting inside the beaten–up trailers that with the three bedrooms would house a family of 12, listening to some of the most heart-breaking stories didn’t inspire me to then want to photograph my subject, it felt impersonal and almost inappropriate. So I would wait until we would stop filming, I felt the need to shift the energy, so the still images represented their power, not their pain.

Q : In these challenging times:  will the exhibition continue to travel and the documentary film release? Are you looking to produce a book?

Anderson : I have been asked by many private groups, schools and museums (including the Smithsonian Institution’s National Museum of the American Indian in Manhattan) to show the film and then be available for a Q&A. I believe that by way of gathering people to educate and inspire is a wonderful way of seeing action towards healing of the Native communities. The women from the film were flown out to Los Angeles to be at the 24th Red Nation Film Festival where the film premiered last November and won Best Feature Documentary. It was a memorable moment seeing the women speak to the audience of over 300 people and be recognized for their resilience, poise and dignity.

I want to produce a book with all the images I captured as well as speaking to their stories as I have learnt that it is time for the great healing of America with the recognition of all the Native peoples, to honor them for what they have been put through so they can walk amongst us as proud peoples.

I am looking to self–distribute the film where it will be available on the website by the fall of 2020 www.womenofthewhitebuffalo.com as this is a donation based project, currently any and all contributions are welcome through the website.