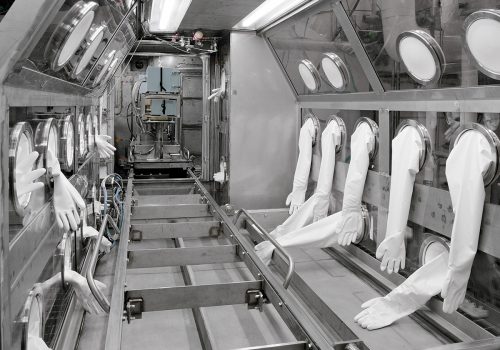 “The majestic beauty of barren landscapes and weapons of mass destruction, revealed in the hands of a master photographer.”  —Richard Danzig, 71st Secretary of the Navy

David Maisel’s Proving Ground comprises aerial and on-site photographs made at Dugway Proving Ground, a vast military compound covering nearly 800,000 acres in a remote region of Utah’s Great Salt Lake Desert. A primary mission of Dugway is to develop, test, and implement chemical and biological weaponry and defense programs. The site is key to the national security arena and an enigma to almost everyone else. As with Maisel’s other subjects of investigation, Proving Ground is freighted with questions surrounding power, secrecy, land use, and an abiding skepticism toward technology and human endeavor.

After more than a decade of inquiry to the Pentagon, Maisel was granted access to Dugway in order to photograph the terrain, testing facilities, and zones of toxic weapons deployment. Maisel began by photographing at ground level, focusing on structures related to chemical weapons dispersal patterns. He moved then to an aerial perspective to create abstracted, immersive images of weapons testing grids that appear as large-scale, minimalist drawings inscribed on the land. Maisel’s work at Dugway also includes photographs of the newly minted WSLAT (Whole System Live Agent Test) laboratory, which is devoted to identification and neutralization of chemical and biological toxins that can be weaponized by terrorists or rogue nations. Proving Ground is a critical response to the extraordinary formal and political aspects embedded at Dugway, in Maisel’s words, a“hidden, walled-off, and secret site that offers the opportunity to reflect on who and what we are collectively, as a society.” With illuminating essays by William L. Fox, Tyler Green, Katie Lee-Koven, and Geoff Manaugh.

David Maisel was named a Guggenheim Fellow in the Creative Arts for Proving Ground in 2018. Maisel was a Scholar in Residence at the Getty Research Institute (2007) and an Artist in Residence at the Headlands Center for the Arts (2008). He has been the recipient of an Individual Artist’s Grant from the NEA, and was short-listed for the Prix Pictet (2008). He received a BA from Princeton University and an MFA from California College of the Arts, in addition to study at Harvard’s Graduate School of Design. Maisel’s work is included in more than forty public collections, including the Metropolitan Museum of Art; Los Angeles County Museum of Art; Victoria & Albert Museum; National Gallery of Art; J. Paul Getty Museum; and San Francisco Museum of Modern Art. His work has been the subject of six monographs: The Lake Project (Nazraeli Press, 2004), Oblivion (Nazraeli Press, 2006), Library of Dust (Chronicle Books, 2008), History’s Shadow (Nazraeli Press, 2010), Black Maps (Steidl Verlag, 2013), and Mount St. Helens: Afterlife (Ivorypress, 2018). Proving Ground follows exhibitions at Haines Gallery, San Francisco, CA, and Nora Eccles Harrison Museum of Art/Utah State University.