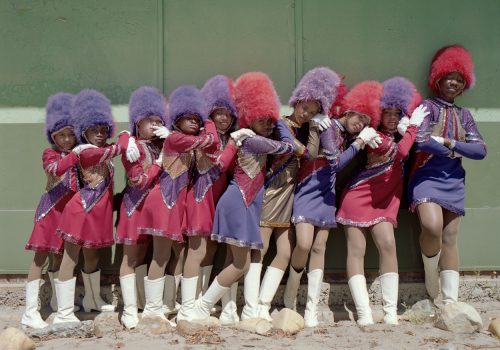 In their new bi-coastal iteration Danziger Gallery announces their first show in Los Angeles at the collaboratively named Danziger at Fetterman.

As some of you also know, Danziger Gallery moved from 980 Madison around the corner to 952 5th Avenue where you will find them overlooking Central Park.

Meanwhile, their Los Angeles exhibition pairs the work of two African photographers separated by many decades and the length of the continent – Seydou Keïta’s black and white portraits taken in Mali in the 1950s and ‘60s and Alice Mann’s color photographs of South African “Drummies” taken in 2017 and 2018.

Born circa 1921, Keïta lived in Bamako where he ran a successful portrait studio. Essentially self- taught, Keïta developed his trademark style photographing his sitters in daylight against a variety of backdrops from plain drapes to vibrant African pattern. Some brought items they wanted to be photographed with but Keïta also had a selection of accessories and clothing at his subject’s disposal. No matter the situation Keïta had a natural gift and a refined aesthetic that made his portraits true and distinctive works of art.

Unknown to the West for most of his career, Keïta was “discovered” by westerners in the early 90’s by the African Art collector Jean Pigozzi and his curator André Magnin who brought 921 negatives to Paris to make the first archival prints of the images under Keïta’s supervision.

In 1994 Keïta a was given a solo show at the Fondation Cartier followed by museum shows around the world. By the time of his death in 2001, Keïta was not only recognized as one of the greatest photographers of the 20th Century but in his use of contrasting backdrops, his work has influenced a whole generation of artists, most notably painters Mickalene Thomas and Kehinde Wiley, and triggered a worldwide interest in African photography.

Mann, now 29 years old, grew up in Cape Town and aims to create images that empower her subjects. The “Drummies”as they are known range in age from five to eighteen. The aspirational culture of the sport creates a safe space empowering the Drummies in an all female structure. They are encouraged to excel within the team and the sense of belonging and identifying with its positive culture provides a life affirming experience in a society where opportunities for young women are often severely limited.

In the environment many of the Drummies grow up in women’s rights are often challenged and violence against women is commonplace.   Regional excellence promises future scholarships,   or at the very least a chance to go on national tours. But, the sport is expensive, and few parents can easily afford it. Looking at the images with that in mind, one can see the aspiration that buttresses every pose and practiced smile. But the photos, Mann said, show the Drummies “how they want to show themselves— uniformed, painted, done up.”

Mann’s work has been published in The Guardian, The New Yorker and The British Journal of Photography. Her series ‘Drummies’ was selected as a winner of the 2018 LensCulture emerging photographer prize and she was recently awarded London’s National Gallery Taylor Wessing por- traiture prize, the first time that a series has ever been selected.

Danziger at Fetterman is open Tuesday to Saturday, 11 to 5. Appointments preferred and Covid protocol required.