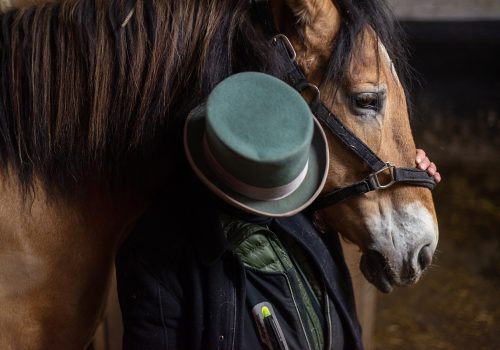 Ballad for the Carriage Horse

Ballad for the Carriage Horse is a long-term documentary project about the carriage horses of New York City. Numbering more than 170,000 in the 19th century, these horses were the driving force of the developing metropolis, transporting goods, locals and tourists across the city’s bustling streets. Today, less than two hundred carriage horses are the living testimony of this history. Under the pressure of animal rights organizations and the recurrent attempt of the mayor to shut down this business, one of New York’s most iconic institutions is under threat. Photographed in Clinton Park Stable, one of three left in Manhattan, on the streets, and in Central Park, this project explores this famed subculture, as well as the deep emotional bond of humans and horses.

For some carriage drivers, horses are way of life, and Ariel Fintzi is one of them. Grew-up in kibbutz Netzer Sereni in the center of Israel, his relationship with horses started as soon as he could walk. He spent most of his days outside, worked at the cowshed and the fields, but his daily highlight was to work in the kibbutz’s stable. When he joined the army, at 18, serving as a combat soldier and fighting in Lebanon, he brought the horses with him, and built a stable inside his base. After the army, he moved to New York and became the first Israeli carriage driver. After 38 years in the business, he’s now the last Israeli driver. For Ariel, it is more than a way to pay bills. It’s love, his biggest passion and a way to deal with traumas.

Although they are icons of New-York, very little is known about this controversial issue and the life of the horses and the drivers. The business is very diverse, as women and men, young and old, students and full-time drivers, are working together. The stables are more inspected than the city’s homeless shelters and daycares, and laws prevent the horses from working if the weather is too cold or hot. When the horses reach the retirement age, they are moved to farms upstate, unlike racehorses – which are sold to the meat industry. I agree that the place of a horse in a city like New York is a subject for discussion, and this project’s goal is to unfold and reveal the nature of this culture and to provide a better understanding of it.

When so much money is invested to stop the carriage horses, provided by organizations like PETA an NY Class, the public have to understand the complicities and dilemmas of this business and how it changes. At the beginning of the project, in January 2019, there were four stables in Manhattan. Today there are three. In addition, after the city’s decision to ban the carriage from 59th Street, the night shift earns a third of what they used to. After more than 150 years of carriages in Central Park, the next few years might be the horses’ last.