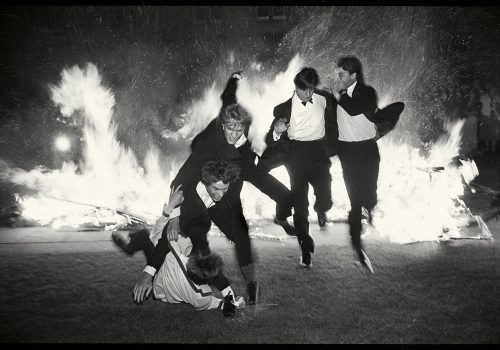 “I had access to what felt like a secret world. It was a subject that had been written about and dramatized but I don’t think any photographers had ever tackled before. There was a change going on. Someone described it as a ‘last hurrah’ of the upper classes.” – Dafydd Jones

Oxford University at the start of the eighties, rife with black ties and ballgowns. A change was on its way – best described by a newspaper as ‘the Return of the Bright Young Things’.

At this time, Oxford University was synonymous with the wealthy, the powerful and the privileged. Many of the young people in these pictures moved on to have careers in the establishment including Boris Johnson and David Cameron. In these photographs, however, their youth is undeniable: teenagers in full suits celebrate the rise of Thatcher in England and Reagan in America, in between punting on the river, chasing romance and partying through the night.

“It was Thatcher’s Britain, a period of celebration for those that had money” – Dafydd Jones

Oxford: The Last Hurrah shows a world that has been written about and dramatized, yet never photographed. Affectionate and critical, it pokes affectionate fun at its subjects while celebrating English eccentricity. From the architectural marvels of the colleges to misty mornings along the river at dawn, this is Oxford at its most beautiful – and the students of the 1980s at their most raw and honest.

Dafydd Jones (b.1956) grew up in Oxford, and started working for the Bodleian Library aged 16. His pictures of the Oxford University ‘Bright Young Things’ launched his career. With work published in the Tatler, Vanity Fair, The New York Observer, The Sunday Telegraph, The Times, Independent and Oldie, his photography is held in the collections of the National Portrait Gallery and the Hyman Collection of British Photography, London; the Martin Parr Foundation, Bristol; the Opsis Foundation, New York; and the Yale Museum of British Art, New Haven.