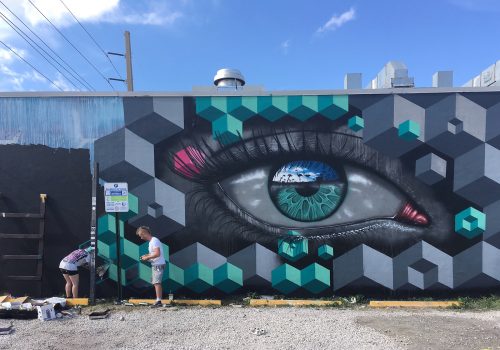 Today was devoted to exploring private collections in Miami- the Margulies Collection at the Warehouse and the de la Cruz Collection.

The first stop was to the Margulies Collection at the Warehouse in Wynwood. When in Wynwood, you are confronted by a sea of colorful murals wrapped around the façades of several buildings in this pulsating art hub. There are restaurants, galleries, retail shops and construction sites. In just a few years, Wynwood has gentrified so much that art galleries and institutions are pushing north and west to evade the increasing rent.

On my way over, I bumped into the smell of spray paint and a huge mural that Snub 23 and My Dog Sighs were collaborating on. It would not be Wynwood without these large scale works of art that have helped to brighten and revitalize the area. Walking west and past many wholesale stores, I was greeted by Michael Heizer’s Elevated, Surface, Depressed 1969-81 made from volcanic scoria placed on diamond plated aluminum pedestals. -Not a bad “hello”. Image 32, 33, 34, 35, 36

The Margulies Collection at the Warehouse (a non-profit institution) exhibits contemporary art from a variety of mediums in their 45,000 square-foot warehouse. Upon entering, the collector Martin Margulies, was getting ready to give a tour. Martin is in the back of the image in the blue sweatshirt and glasses. Image 37

What I like about this institution besides their remarkable collection is that they donate their ticket sales to help the local community. Their ticket sales support Lotus House, an organization dedicated to improving the lives of homeless women, youth and children. If you are looking to support a charity, Lotus House (https://lotushouse.org/) does great work bringing people back up on their feet to help them continue their productive lives. Image 38

The next room I walked into was filled with photographic legends. There were polaroid prints Walker Evans captured of the American landscape using the first “instant camera” (Polaroid SC-70) in the 1970’s. Next to it was his work on America with the FSA (Farm Security Administration). Helen Levitt’s black and white NYC street scenes couldn’t be missed as well. She had passed in 2009 after actively taking images, mainly of NYC street life, for nearly 70 years. And it made sense to follow with a wall of Stephen Shore’s work. Stephen was strongly influenced by Walker Evan’s book American Photographs. Although much of his work embodied those lyrical scenes of North American landscapes, what set him apart from many other photographers was his use of color photography. He masterfully transformed mundane scenes of the American vernacular into places of intrigue. Image 39, 40, 41, 42, 43, 44, 45

I had continued to walk through the warehouse and couldn’t help but capture a fragmented self-portrait through Michelangelo Pistoletto’s Two Less One, 2009. It reflected his video, Broken Mirror Painting, a performative act captured during the 53rdVenice Biennale. Image 46

Further into the warehouse was Thomas Struth’s Pergamon Museum 1, Berlin, 2001 and Vik Muniz’s Pictures of Junk Series: Saturn devouring one of his Sons, after Francisco de Goya y Lucientes,2005 Image 47, 48

But the biggest surprise was viewing Leandro Erlich’s Elevator Pitch, 2011 where an interior elevation of real elevator doors was built to scale. Its doors opened intermittently and shared video elevator portraits of the people who frequented them. It was quite brilliant to be reminded of the many snapshots of portraits we all experience in our daily lives. And the smiles from viewers passing by it were nothing but contagious. Although not image related, Gilles Barbier’s L’Hospice, 2002 brought a good laugh too. Image 49, 50, 51

Onwards we go to the de la Cruz collection! Located in Miami’s Design District and in a three-story, 30,000-square-foot building which is free to the public, you are first welcomed byan untitled 42-foot-by-24-foot billboard created by artist Felix Gonzalez-Torres. With his minimalist and conceptual approach Felix uses everyday relatable material to express his themes of gender, sexuality, life, death, loss and love. He had passed at the young age of 38 in 1996 from AIDS in Miami. Here is his photographic work Untitled (Sand), 1993/94. Also exhibited was his Untitled (Alice B. Toklas’ and Gertrude Stein’s Grave, Paris), 1992. This photo of flowers at her grave site recognizes Alice and Gertrude’s legacy and commitment to each other. Gertrude and her partner Alice had a salon in Paris where great thinkers and the avant-garde gathered. Other photographs included those that documented Ana Mendieta’s Silueta Works in Mexico, 1973. Image 52, 53, 54, 55, 56

Later that night, there was a Swiss intervention, something not surprising to experience during Art Basel Miami week. I met Wolfgang who had designed the beautiful booklet for the fair. There was also Lukas who uncannily sounded like Werner Herzog, and Aaron an architect based in Basel. Their portraits were taken to be part of TYPE, my portrait series which questions the notion of categorization by grouping people by blood type. Here’s a shot of Lukas in studio and a portrait of Aaron from that night. Image 57, 58