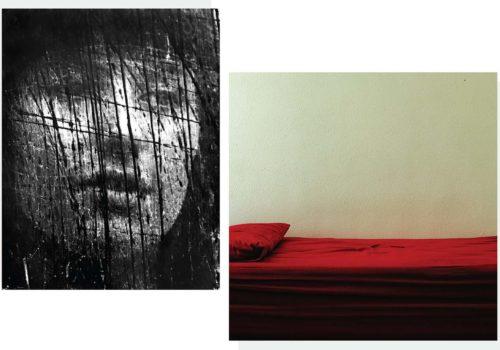 This is the eigthteenth dialogue in the Ettore Molinario Collection. A dialogue from which my passion for photography derives and so my constant reliance on images with the purpose to continue a long and profound investigation of myself. Analyst’s couch and a wounded face, as if to say here’s the body of pain and the method to understand it. And the cure, as the magnificent authors Sarah Jones and Sanne Sannes suggest, is to never stop looking.
Ettore Molinario

Those who have not tried, do not know the pain and the desperate pleasure of lying on the analyst’s couch. The body reclines and it is as if it were re-entering between the edges of a wound that is still warm. Something, perhaps the muscles, falls asleep, for it is a bed after all. And something deep inside awakens, begins to move, to throb, to bleed. Once upon a time people were born in a bed at home. And it is this awareness of the unborn child, this bed for a new labor, that Sarah Jones has photographed since 1997 in her long series dedicated to the space that every therapist sets up for their patients. Among these rooms, where painful and therefore saving words resound, the room with the « red bed » is the most emblematic. Miracle of a color that reminds us of the cloak of the Magdalene in Masaccio’s crucifixion as in the redroom, murder in the mirror, in Stanley Kubrick’s chamber of horrors.

Yet, it is precisely in such an overlapping of tragic space and the experience of love and loss that ideally another extraordinary author like Sanne Sannes has decided, in a short and very intense career, to stage the scene of his obsessions. At the center of the gaze are the face and the female body; of women Sannes loved to portray the emergence of pleasure, the movement of spasm at 1/25 of a second. Other beds, just unmade, other births, other deaths as such are orgasms. And above all other wounds, this time inflicted by the author himself who left marks, scratches, cuts on the living and delicate substance of the negative.

After Sanne’s tragic death at the age of thirty, his work was long forgotten. Four decades later his brother, Rob G. Sannes, awoke him from a deep sleep, yet another bed, and brought him back to light. The interest was immediate, so much so that the image currently in Ettore Molinario’s collection – a single enlargement made in 1966 for the Sannes exhibition at the Arnhem Museum – was already being negotiated to enter the Rijksmuseum in Amsterdam. What those engravings on a woman’s face hide or reveal, whether it’s love gone or rejected, or maybe loneliness, we do not know. We know instead that the first volume published by Sannes was entitled Oog om Oog, eye for an eye. Revenge, extreme challenge, violent union? My gaze that crosses yours and owns you? Perhaps. And perhaps it is no coincidence that Sigmund Freud « invents » the analyst’s couch and isolates the patient because it was impossible for him to sustain for long those eyes that are thirsty for pain and answers.
Ettore Molinario