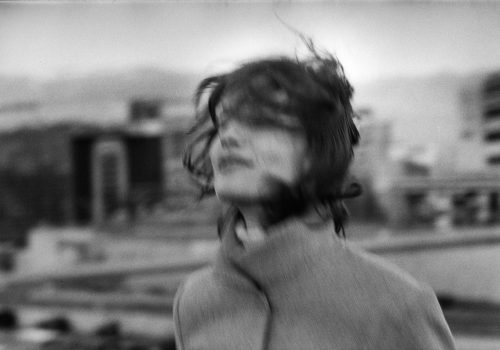 Yes: completely! That’s why, on the occasion of her exhibition at Galerie XII, we present you 12 new photos accompanied by excerpts of the text by Alain Bergala.

The Great Actress and the Photographer Friend (excerpts)

The Great Actress acts in a movie. For weeks, she will be under the eye of the director, but also under the eye of the director of photography, who is not quite a technician like the others. Even if he works to make the image that the director expects of him, something often happens between the actress and him, a very special connivance between the one who gives her image and the one that gives her form, light and matter. This connivance is a little secret, almost without words. The chief operator protects what he has guessed as points of fragility at home, real or imaginary, but which the filmmaker sometimes needs to give strength to his film. The spectator not see a thing. For the Great Actress, forces and fragilities are not contradictory, she needs both to take her place in the creation of the film. Her roles often stand in this gap between the hard and the fragile.

When filming stops – and as Bergman used to say “the camera always stops” – the intensity of what happened in this triangle suddenly goes out. Everyone goes back to another movie. For the Great Actress a new film will begin soon, because it almost never stops turning. The triangle will be reconstituted elsewhere, with other image partners. With each film, the intensity of what is played in this triangle is to begin again.

In the interstices of her filming life, the great actress often finds herself in front of another objective, that of the photographers who obtain from her pose sessions.

They have always been very numerous. This is not done reluctantly because she is a collector, even a glutton for being looked at. An exhibition and a book – La femme aux portraits – gathered in 2005 a hundred photos, among the tens of thousands where she posed for the best photographers in the world. All that counts as authors in photography, since the 70s, wanted to capture from her an image where he would tame her own style. An author, in photography as in cinema, is someone who integrates his model into images that bear the seal of his/her own style, an aesthetic imagination, that of a vision that belongs only to him/her. The operation is not so easy with her. She has a bullet proof capacity for photographic resistance.

With her friend the Photographer, the time of the exchange is no longer delimited into tight slices, in fixed sequences, closed on themselves. What the great actress likes in this relationship is that even after long breaks, sometimes months, she knows that they will meet again one day or another, here or elsewhere, that the meeting will resume, that nothing stops and never freezes between them. Their photographic reunion are moments among others, in their own lives, where the event alibi (a festival, a costume fitting session, a trip, etc.) ultimately counts less than the continuity of their exchanges. This long session is never interrupted, only suspended from time to time.

In this dotted permanence of their photographic relation, each has become free of their role. No superego governs the game that she will improvise together with each new reunion, with the lightness of those moments when no one is no longer afraid of the other, where no one feels the need to prove anything to anyone, to the other, where both are just visibly happy to find and comfort a bond of photographic friendship. Between them, the problems of style or of power do not arise for a long time. The Photographer Friend no longer needs to mark his/her authority these images that are really shared, where the border between the pose and the improvisation is often undetectable. Collusion, which is a used word, here takes up again its original meaning of “let do”: to let between them the images be made, without any kind of forcing.

In real life, they could not have been childhood friends, but when they meet again, they come together in this nostalgia that two women can have from a parallel childhood. The Great Actress, one day, takes the Girlfriend Photographer in the house that was the one of her childhood. This is an exception, because it carefully ensures that the private woman and the public woman are separated in a tight manner. Does she know at that time that Carole C. was a 14 year old photographer? Not a teenager who makes photos but a real photographer, with a specific project, rigorous, where her photographic relationship to others and the world were already established. She started as a teenager to photograph her high school friends – the most beautiful she says – in corners of the big family home. Not in the common space of the family but in hiding places, imaginary huts, spaces stolen from the collective family life.

There remains something of this game of teenagers in their pleasure to find, wherever they are, small spaces stolen from the large communal spaces of workplaces: lodges, hotel rooms, corridors. They also share the nostalgia for the lost homes of childhood, which the photographer has made one of her obsessing subjects.

The Photographer sometimes accompanies the Great Actress on a trip. Photographing someone on a trip is often exotic , as if something of the identity of the person had necessarily changed in this other country, in this new setting. The Photographer  continues to look at her as she has always done, as if nothing of their relationship was different in this new context. On the contrary, everything happens as if being out of their usual territories makes them closer. In these photos by the way, nothing picturesque: ordinary sites where the atmosphere of a country is more palpable than in the tourist or symbolic points. They prefer places with common names: the rice field, the street, etc.

In China, Brazil, the change of scenery does little affect the image of the Great Actress. She lives in the streets of China as she lives in Paris. It is also that the relationship between her and her friend the photographer is firmly woven, and her continuity stronger than the break that could constitute a displacement of a few thousand kilometers. There must be something reassuring, for the Great Actress, to be under the permanence of this eye that continues to look around the world with the same calm, the same availability, the same gentle attention. The only photos of this book with a backhand on the admirers were made in China where strangely the silhouettes of the girls are very close to that of the actress, like multiple doubles and anonymous. One of them even accidentally wears a striped T-shirt and glasses

In one of the thousands of pages found in the trunks of his apartment, Pessoa writes:

“The immense series of people and things that make up the world is for me a gallery of endless paintings, whose interior does not interest me. It does not interest me, because the soul is monotonous, and always the same in everyone; only the individual manifestations differ from it, and the best part is that which overflows towards the dream, the pace, the gestures, and thus penetrates into the picture that seduces me … ”

There are great photographers who have given themselves the ambitious project, to succeed in making an image where would be visible “the soul” of the photographed, to speak like Pessoa. Some have sometimes succeeded, but the soul being monotonous cannot be caught twice. They must therefore constantly change their ways. The great actress and her friend the photographer have made the opposite choice, that of playing together, as often as possible, without the slightest superego, with what “overflows” from the famous “soul”. They have woven, quietly, over time, what is probably the most accurate and true portrait of the multiple actress named Isabelle Huppert.

from November 15th to January 17th