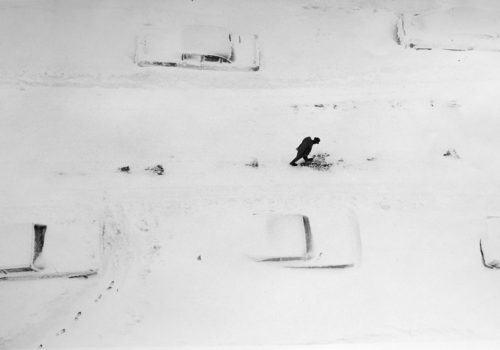 Adger Cowans (b. 1936), has experimented with a myriad of mediums over his artistic career, ranging from fine art photography to abstract expressionist painting. His photographs exemplify the attentiveness of a curious onlooker with great affection for the visual offerings of the world; a quality that would define his works throughout his career. Like many artists from the black community, his work has recently received critical attention, having been featured in the ground-breaking exhibition, Working Together: The Photographers of the Kamoinge Workshop, curated by Sarah Eckhardt at the Virginia Museum of Fine Art, and opening at the Cincinnati Art Museum on February 25, 2022, after having traveled to the Whitney Museum of American Art and the Getty Museum.

A native of Columbus Ohio, Adger Cowans was one of the first to earn a degree in Photography from Ohio University in 1958. It was there that he studied under Clarence White Jr., the son of the legendary photographer Clarence White Sr. who is credited as being one of the early progenitors of fine art photography. It was at this time when Cowans was introduced to the works of White Sr. and the other masters of photography who also exhibited at Alfred Stieglitz’s 291 Gallery including Stieglitz, Edward Steichen, and Paul Strand, as well as to the other luminaries of the time who would greatly influence Cowans such as Edward Weston, Minor White, and W. Eugene Smith.

After moving to New York City in 1958, Cowans took a job assisting Gordon Parks at Life Magazine, while he continued to define his own style. Parks would become a life-long friend and a supporter of Cowans, later referring to him as “one of America’s finest photographers.”

One of the most instrumental moments in Cowans’ career occurred while living and working in New York City during the early 1960s. Cowans was recruited by James Ray Francis to become a founding member of The Kamoinge Workshop, and along with Louis Draper, would be the only members with a formal education in the arts at the time. The Workshop was a place where members would gather, critique, and support each other personally and professionally at a time when black artists received little attention in the artistic community, and Cowans and Draper were the de facto teachers. After 60 years, Cowans still remains a member of The Workshop today, where he currently serves as its President.