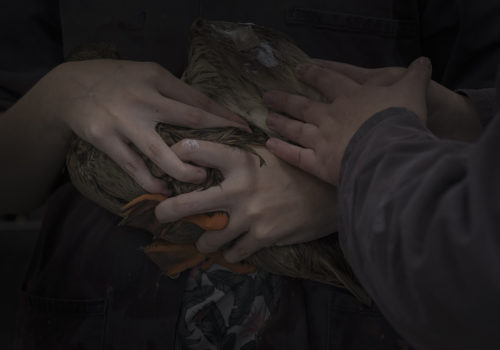 The Talent Grant, created in 1997, has revealed many photographers, who take a unique look at our society and invite us to see it differently. At the origin of the emergence of talents without distinction of age, nationality or background, this Grant was initiated within Photographie.com by Didier de Faÿs, with the support of the Picto Foundation, who produces the prints for the winners. Thanks to the generosity of the photographers and the PICTO laboratory, a set of their prints is added to the collections of the BnF. In fifteen years of partnership, several hundred photographs have thus entered the national heritage, attesting to the liveliness of the contemporary photographic scene. For Didier de Faÿs, the three photographers who were chosen for this 2021 edition “tell all the hope brought to the world after the health crisis. Beyond real or social borders, beyond words and type of photography, these photographers are militant activists of the commonalties that bring us together.”

French and Senegalese photographer born in 1985, Gabriel Dia designs his Fragments series as an attempt to reconnect with his senses. “In the Senegalese Muslim society where I grew up, the body is considered an object of impurity that must always be washed before the prayer ritual. With this project, I hope to gradually silence these sounds that rocked my childhood and my adolescence before my exile in France at the age of 18. Learning to love my body and its attributes again”. Gabriel Dia

Gabriel Dia also explores his story and his identity in his series of self-portraits Sabar devoted to a Senegalese dance of the same name reserved for women, which the photographer chooses to dance while hiding behind a negative film operating as a protective veil.

Self-taught photographer born in 1990, Aurélie Scouarnec explores themes related to popular myths and beliefs, in close interaction with nature. Since the beginning of 2020, she has also been making a series on a wildlife care centre. Her works are part of the same research about light, textures and sensation. “The series [Anamnêsis] returns […] to the night of the origin, in search of what moves upstream of language and memory. She navigates among certain traces left by the first thoughts, poetic and philosophical, of the origin of the world and  men. Bodies emerge there, seek each other and rise up. In the circulation of primordial elements is woven this quest for a place of recognition of an ever more remote anteriority.” Aurélie Scouarnec

The Feræ series plunges into the heart of the activity in a care center for wildlife, while species and their habitats are constantly shrinking. She explores the daily life of these gestures of care, like so many attempts to repair the link with the living.

Born in 1977 in Saint-Étienne, Yann Datessen learned the profession of photographer late in life, as an autodidact. His AR project has its source in Charleville-Mézières, birthplace of Arthur Rimbaud who left a photo to posterity at his death, a dry correspondence and some sublime texts. Today in Charleville-Mézières, while every street corner bears his name, those under 17 do not really know who he is. Between 2016 and 2020, the photographer scoured public establishments in the Ardennes to portray teenagers from all walks of life. “I used these encounters to then celebrate, beyond the borders, a constant: the famous pout of the dissatisfied, whether they are from the Ardennes or French expatriates, the pout of those who are far from themselves, far from a shore that it is decidedly fashionable to flee.” Yann Datessen