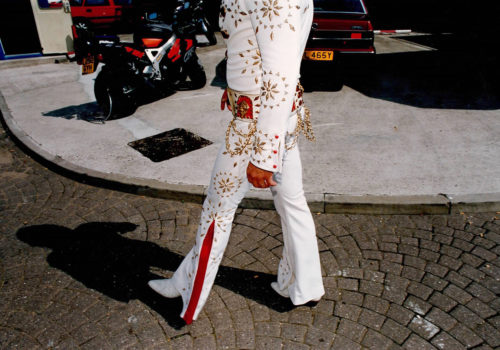 Thank God for Elvis is a photobook by British photographer Gavan Goulder (b.1965, UK), documenting the love, and often obsession, that Elvis Presley continues to inspire in seemingly everyday people, fans and non-fans alike, more than 40 years after his death. Elvis as an all-pervading cultural icon.

Alongside Goulder’s documentary and ﬁne art colour photography capturing this hero worship, Thank God for Elvis features numerous scanned newspaper clippings collected by Goudler during his working as a photographer at the Daily Telegraph. The frequently provocative conspiracy theory led tabloid style headlines reflect the difﬁcult relationship Elvis had with the media, often openly mocked rather than being celebrated as an iconic ﬁgure. They sit at odds with the unbridled joy the King continues to provide all those who encounter him.

While he does not consider himself an Elvis fan, Goulder is deeply fascinated by those who are. He is captivated by the instant recognisability of Elvis, not just by his sound but of the way he looked. Growing up close to a cinema in Merseyside, Goulder remembers watching Elvis, ‘this cool guy in ﬁlm after ﬁlm, doing his thing, surrounded by girls, and all us kids pouring onto the street at the end, singing and dancing just like him. It must have been a funny sight.’ Goulder was 12 the day that Elvis died, driving to London with his father where they had moved to, unhappily so for Goulder. He recalls the grey, monotonous motorway and the miserable journey being broken up by the radio playing back-to-back Elvis songs and his father’s repeated standard Elvis impersonation – arguably the most recognisable impression of all time.

It was while studying at Bournemouth College of Art and photographing at a pub’s 1950s night, that Goulder was drawn to a girl dancing in a striking polka dot dress. It was only on developing the ﬁlm that he noticed she was dancing with a man wearing a T-shirt featuring Elvis’s face. In one of the pictures, the face was slightly deformed, but it remained unmistakably Elvis. Goulder identiﬁed how unique Elvis’ image was, transcending time and place, and started to research and document Elvis on a near obsessive scale throughout his work. On one occasion Goulder took a deliberately out of focus photograph and yet it remained quite clearly Elvis, the ghostly ﬁgure of ‘the King’. In the mid 1990s, while working at the Daily Telegraph, Goulder would hear of Elvis related events, such as auctions and look-alike competitions, which he would often be asked to cover professionally. Even twenty years after his death, Elvis continued to be everywhere.

Goulder contacted The Elvis Presley Fan Club and attended an Elvis Fan Club reunion weekend at a Pontin’s Holiday Camp in Hemsby, near Great Yarmouth. Standing out against a backdrop of 50s outﬁts in his typical clothes with a camera around his neck, the club was initially hesitant to let Goulder document the event due to the ridicule its members continued to attract from the press. When Goulder started photographing it is clear through his images the respect he feels towards these fans, who resemble a family, looking after each other and united in their celebration of Elvis. There is a clear energy in Goulder’s images that reflect his own individual celebration of this idol and his legacy. Alongside the frenzied dancing at the disco, people stand trance-like on the edge of the dancefloor; singing every word, sometimes eyes closed, into the music, into Elvis, into their God.

Gavan Goulder is a social documentary and portrait photographer. Directly inspired by the need to capture the natural beauty of a sunrise over the Grand Canyon while driving across America in 1986, Goulder has been a professional photographer for over 20 years. On graduating university, Goulder (b. 1965, UK) spent three years photographing for the Daily Telegraph before becoming a full-time freelance photographer. During this time he worked on editorial photography for a wide range of publications including The Guardian; the Observer Magazine; the Saturday Telegraph Weekend Magazine; London Evening Standard, Country Life; and Marie Claire. He also worked for a number of international corporate clients that include Patek Philippe; BMW; OMEGA Watches; Boxfresh; and Thomas Cook.

Goulder is working on a number of photography projects that include mental health issues, his ﬁrst photo book Black Dog was published in 2019, and the climate crisis which has seen him volunteer as a photographer for Extinction Rebellion. This has led to a major ongoing project, Citizens of Love and Rage, photographing people who have used civil disobedience as a form of protest. Goulder also gives talks about his work across the country. He relocated from London to Cornwall, where he lives with his family.