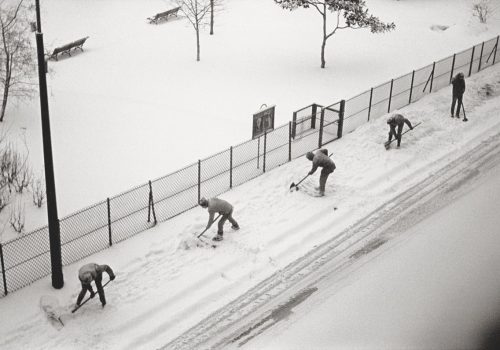 Paris is the city where I lived as a child, and it has been important to me, especially from 1960 to 1965, my teenage years, where I always went to “learn” about images at the Cinémathèque and see the New Wave movies on the left bank.

I always photographed Paris, even as a child with a Brownie Flash (my first photo, the balloons in color, place de l’Étoile, in 1954, I was 9 years old); then I filmed  in 8 and in super 8 mm, with my friend Étienne O’Leary, who filmed in 16 …

The cinema undoubtedly influenced me, especially the films “The life upside down” by Alain Jessua and “Alphaville” by Godard.

After years spent abroad, I always rediscovered Paris, returning from each trip, California in 66, the Sahel in 75, 76 and 77: to find myself again in Paris always gave me a deep desire to take pictures – its inhabitants, its streets, and also the cafes, and the pretty girls walking in the streets! All this with only a 50 mm, the so-called “normal” lens, like Raoul Coutard’s camera on the shoulder, the cameraman of Truffaut and Godard.

My eyes were like new after the desert landscapes! coming back from the desert and finding oneself in the subway, the gardens, the museums, the tiny streets … Paris! the impact ! And, who says impact, says photos!

It’s not a city harder to photograph, no!

What is difficult is to be able to see ” your own place”!  To photograph what you think you know so well! These last months, I went on purpose to Montmartre, to l’Étoile to see if I could take pictures of these well trodden places, being Parisian since childhood: that was fascinating, to rediscover every street, every smell.

What I like in Paris are the changes of light, the clouds: we go from dark gray to a ray of dazzling sun, it is strong like the paintings of the Northern Countries!

So no more difficult than anywhere else, just look carefully and let yourself see everything as if for the first time.

The key to Paris is to travel by bus and – from the window – to look at the roofs of buildings and all periods of architecture! When I was young, I even used the platform buses, the ground  slipping under your feet … It was happiness!