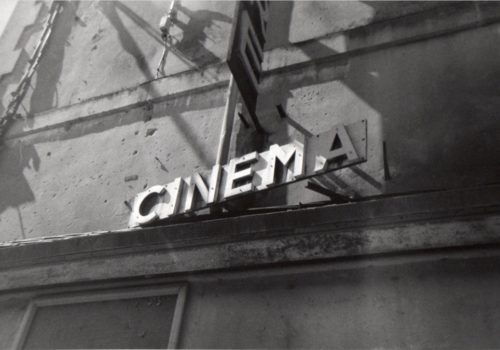 To my great surprise, I realized there were no books or texts in French examining the idea of glamor, which is, after all, quite commonplace in the arts and society columns. I found myself at a loss for words when it came to defining it.

The task was more tricky than I had imagined when I had enthusiastically accepted the commission, fantasizing a parade of blondes and pearls, shimmer and silk, glitter and shadow, in a word, all that I had set out to describe in the kinds of images that no one makes anymore.

When I decided to reissue this text five years later, it was no longer possible to use the images that  originally went along with it due to a complicated copyright situation. The aesthetic affinity and close friendship I have shared with Bernard Plossu over the years gave me the idea of asking him to illustrate this “remake.” This in turn meant freeing the text from the original images and, instead, having those supplied by Bernard comment on it.

This reversal added stimulus to a wayfarer such as Plossu. Among a large number of images he chose according to his own vision of glamor, I retained thirty-six, made anywhere from Pantin to Los Angeles, Turin and London, New York and Brussels, Hyères and Rabat, Palermo and Paris, to San Francisco, and a remote corner of Spain. The images needed to speak and erase the reader’s memories of Marilyn, Marlène, Greta, Louise, Clark, Cary, and Gary…

One probably needs to pause over each image taken by this photographer and cinema lover, who’s fond of the Nouvelle Vague and also like the heroes of the new wave  of the great classic Hollywood films . How often did I go ecstatic before a picture of Plossu who, by the way, lives in a town legendary for its association with the birth of cinema—La Ciotat!

Dominique Païni is a French film producer, theorist, and proponent of film preservation, as well as a critic, and exhibition curator. He lives and works in Paris.