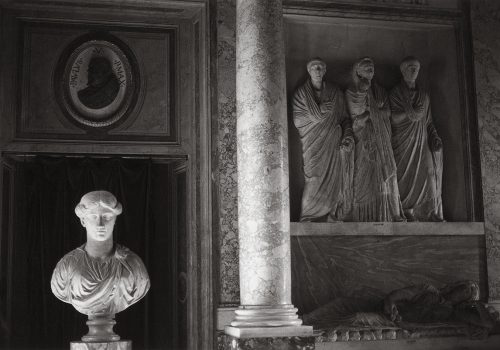 At the beginning of the seventies, passed time in Rome, during a cold and rainy winter; no good photo, I had a wide-angle! except two or three in silent and empty Pompeii under the wonderful rain …

Later, in 1979, having finally understood the discreet strength of the 50 mm, coming from the highlands of Taos in New Mexico where I lived, I met up with Claude Nori in Rome , and there, it is the visual shock: is it living in the desert that makes this city fascinating to me in comparison?

Let’s say that the images of the American West are often horizontal and those of the streets of Rome are often vertical! and that also I am soaked in  very strongly in the Roman work of Corot, to whom I think so often over there … Corot who marked me definitively by his sobriety.

In Rome, we find Paola and Luigi Ghirri, at Mies and Mario’s Rondanini gallery, and also we are all very young, Monterosso!

In 1980, I return to Rome with Françoise, my love forever, Andalusian so Italian!

It pours down in front of the window of our little hotel near Piazza Panteon … We go to Villa Giulia, the Etruscan museum where I photograph a simple vase like a Morandi …

The years will pass, until the return to Europe, and I am now under the strong influence of the painting movement called “The Scuola Romana” (Mafai, Scipione, Pirandello, Antonietta Raphael, Afro): wonders that inspire me a lot.

Many visits: Rome attracts me constantly, I go there almost every year and I photograph in a chaotic way, mostly nothing systematic or organized!  district after district, listening only to my instinct and especially my passion: I am madly in love with this city and, at the same time, all the small Italian islands where I go as often as possible!

I meet up often with Lætitia and Patrick Talbot who live there; in 2000, Patrick succeeded to take me to visit all of the Farnese Palace! ! And the same year, I visit the most metaphysical place that is: the Montemartini power station, former power station turned into a museum of sculpture: so black and white for a photographer! Then I meet in their home Jean-Christophe Bailly for the exhibition “Col Treno”  Italy seen from the train … And always in the lead Corot. I am possessed by Rome, for me a metaphysical not Fellinian city. It is in Rome that La Notte brava de Bolognini is shot, based on Pasolini, with the beautiful Antonella Lualdi, unforgettable … It is also in Rome that begins Fanfaron, Il Sorpasso of the great Dino Risi. And also I enjoy the films where Alberto Sordi, Roman of the Romans act! …

For his part, Jean Digne, at the French Institute of Naples “Le Grenoble”, had brought lots of artists from different disciplines.

All this is built image after image …

All in 50mm in black and white, prohibited effects, pure vision, classic – so modern!

A single view of the Coliseum, the cries of the dead and the gladiators dying for the pleasure of the crowd haunt me too much …

In 2001, I go alone to Ostia, a tribute to Pasolini; the weather is nice and warm in June, the beaches are filled with Romans fleeing the city on weekends …

One is well, alone, to wander in pictures! I go to a little hotel …

Returning in 2005, I visit the architect Fuksas in his Roman offices. All this is an excuse to discover other neighborhoods and countless photos, in true “state of photography”!

All these memories have “made” this set of Rome …

On my way back, I come across the small Italian paintings of Granet at the Granet museum in Aix-en-Provence, which Bruno Ely reveals to me: he also saw small, in any case these landscapes, without any effect, as photography, one could even say!

Fernand Braudel, in his book The Italian Model, said that all artists go to Rome. And I learn recently that Andrea Camilleri, the so funny and abundant Sicilian author, settled at the end of life in Rome, of course,  hey!

As the saying goes: “All roads lead to Rome! ”

– Amedeo Modigliani, The Inner Eye, a collective work with texts by Jeanne-Bathilde Lacourt, Sophie Lévy and Marie-Amélie Senot, is the catalog of the retrospective exhibition organized by the LaM – Lille Gallimard / LaM. 2016, with exciting essays.