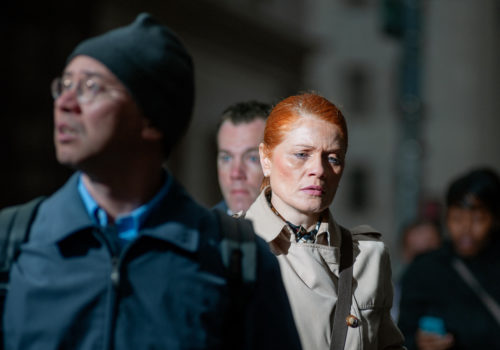 Out of Place is a photo essay that provides insight in the psychological journey of commuters in modern megacities. At the raise of the »Urban Millennium« Bas Losekoot embarked on a visual exploration, considering how population density affects human behaviour. While placing his camera in the liminal spaces of the city, he addresses the state of in-between-ness of the modern urban experience. With an intuitive eye, he observes the »presentation of self« and »micro-second meetings« of everyday urban encounters. By adding drama to the trivial, Losekoot is painting the theatre of the real life, where small gestures become theatrical events. The book includes photography from the cities of New York, São Paulo, Seoul, Mumbai, Hong Kong, London, Lagos, Istanbul, and Mexico City.

Renowned photobook designer Teun van der Heijden translated the project into an extraordinary book. The design emphasises the cinematic quality of the photographic series. It is structured with different page formats and positions, that mimics the stratification of life in modern megacities.

Bas Losekoot is an artist and photographer concerned with socio-economic issues in cities around the world. Working with cinematic apparatus, he is challenging our understanding of reality in everyday city-life as well as the limited narrative potential of representations of truth in documentary photography. His practice combines concepts of sociology and urban theory. He holds a BA in Fine Art Photography from the Royal Academy of the Arts in The Hague and recently graduated for an MA in Photography and Urban Cultures at Goldsmiths, University of London. His work has been exhibited in galleries, museums and festivals including BOZAR Brussels, JIMEI x Arles, Kaunas Photography Gallery, Villa Pérochon Photographic Art Centre, FotoIstanbul, LagosPhoto, Unseen Amsterdam, and published widely in international media.

“Bas Losekoot created photographs with a heightened sense of drama that freeze moments of movement, halting the frenetic pace of passing inhabitants in megacities. His project also explores how, counterintuitively, the commute can be a time for introspection and psychological divorce from reality.” – Ruby Goldberg/The New Yorker

“Exploring the dynamics of the streets; capturing a moment in time that you can delve into and resonate with on a very human level. Losekoot asks thoughtful questions of society by holding up a mirror and inviting honest examination.” – Lyric Lewin/CNN Editions

“Living in cities is to accept a life of paradox. We are physically squashed but emotionally distant. We are sick of people, but we are achingly lonely. (…) This is all to see in Losekoot’s faces, which reveal this paradoxical state with such disarming precision. The calm and the chaos, the beauty and the terror, the comedy and the tragedy, the depths of a soul from an urban life captured in a single frame.” – from the text The Paradox of Living in the City by Hugo Macdonald