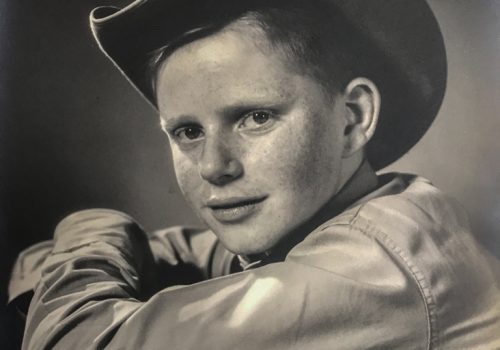 The wild ride that made up the life and times of renowned photographer Bank Langmore (Wilfred Bankart Langmore III), came to an end May 10th, 2020 (unrelated to Covid-19). Bank left with his daughter, Marie, and his son, John, by his side. He was no doubt immediately greeted by the only woman he ever loved, his former wife, Dorothy, and his son, Will.

Born in New York on April 6th 1935, Bank was raised in a family with a legacy of adventure, and he carried on the tradition. His mother, Elinor Livingston Wetmore, was a direct descendent of Robert Livingston who was a member of the Committee of Five that drafted the Declaration of Independence and who also administered the Oath of Office to George Washington when he assumed the presidency in 1789. Bank’s grandfather, Robert C. Wetmore, planted the seed of adventure that Bank nurtured for much of his life. In 1898 Robert Wetmore ran a large cattle ranch in Costa Rica and while returning from purchasing cattle, horses and mules in Nicaragua, he learned war had broken out between the United States and Spain. Desperate to join the action, Robert Wetmore stowed away on a boat from Jamaica to Cuba where he joined Colonel Roosevelt and his troop of Rough Riders.

After attending the Harvey School in upstate New York, Bank moved to Santiago, Cuba, with his mother in 1944 while his father was off at war as an officer in the U.S. Navy. Bank and his mother lived in Santiago with his grandfather, Robert, who was then running the Standard Fruit Company. It was during this time that Robert’s stories inspired Bank’s lifelong love of the working cowboy.

After the war, Bank was sent to San Antonio to attend the Peacock Military Academy (which he never took to) while his parents lived in New York. One of his letters back to his parents pleaded, “Could you please try and get me some cowboy books, and not about olden day but about now-a-day cowboys.” Bank’s father eventually moved to San Antonio to start an airline with his wartime friend, Tom Slick. Tom Slick, the legendary businessman, inventor and adventurer would also play a significant role in young Bank’s life. In 1950 Mr. Slick wrote to his friend, Will Lewis, the prominent Panhandle rancher and owner of the RO Ranch in Clarendon, Texas, and said “A good friend of mine has a son, Bank Langmore, Jr., who is fifteen years old and very keen on ranching. This boy is a fine husky boy and he has had a lot of experience in riding and has done quite a lot of actual ranch work [that was a stretch at best!]. He is most anxious to work for the experience, during the summer, on some ranch out in the ‘real ranching country’”. Bank spent the summer of 1950 on the RO and discovered the way of life that would become his trademark.

While attending Alamo Heights High School in San Antonio, Bank met the young and beautiful, Dorothy Granberry. They would go on to marry and have three children, Will (Wilfred Bankart IV), John and Marie. Although Bank and Dorothy would eventually divorce, they remained in love and committed to each other for their entire lives.

Bank served in the Army in Korea and it was there something happened that would change the course of his life . . . he bought his first Minolta rangefinder camera. After serving in the Army, Bank attended Universidad Iberoamericana in Mexico City. He returned from Mexico City to marry Dorothy and they eventually landed in Dallas where Bank embarked on a corporate career with the Latin American division of Anderson Clayton & Co. But Bank’s passion for and early success with photography nagged at him and as anyone that ever knew Bank can attest, he wasn’t cut from corporate cloth. So, he left the comfort of a corporate career in the early 70’s and embarked on a new life as a photographer. As Bank’s longtime gallerist, Ben Breard, said, “Bank could have sold something to anyone!” He sold William Morrow & Co. on the idea of commissioning an untested photographer to photograph a book documenting working cowboys across the American West.

The resulting book, The Cowboy, published in 1975, was a hallmark of authentic documentation of the working cowboy. After encountering the book, any number of young men headed West to try their hand at cowboying. And like the work of Will James, The Cowboy holds a revered spot in most cowboys’ bookshelves.

The Cowboy launched Bank’s career as a highly regarded photographer. His work was widely published and exhibited around the world, including recently at San Antonio’s Briscoe Western Art Museum and the National Cowboy in Oklahoma City. He was considered a master darkroom printer and anyone that ever worked with him knew his commitment to making the “perfect print” was unyielding and drove many a photo lab technician mad. He used Minolta cameras and the company was one of his biggest advocates and supporters.

Bank’s personality was larger than life. To call him exuberant would be a gross understatement. One writer described his encounter with Bank this way, “A talk with Bank Langmore on photography is like an intensive session with a wonderfully voluble, wheeling-dealing Photo Lab Index with bandana and boots, and you emerge as after a physical workout but sparked with enthusiasm and bubbling over with new ideas.” All that knew him would laugh at the accuracy of that description. But sadly, that enthusiasm was in some part driven by mental issues that afflicted him most of his life. Ultimately that “voluble” personality cost him his marriage and prevented him from sustaining his career as a photographer.

But Bank’s passion and love for Dorothy, his children and grandchildren, photography and the working cowboy never faded. He was beloved and respected by a vast network of friends that ranged from working cowboys to ranch owners, and photographers to University Presidents. Bank Langmore left a lasting legacy with his beautiful photography as well as his son and daughter, and his three grandsons, Milo, Jordan and Grant. He will be missed by all those he left behind, but, any sadness is tempered by knowing he is at last reunited with his beloved, Dorothy, and his son, Will.

PDNB Gallery remains Temporarily Closed, but will meet with clients by appointment only on Mondays.