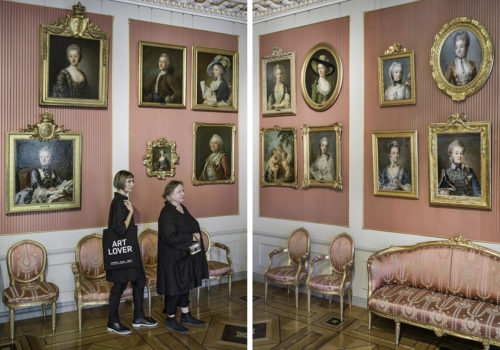 The exhibition at Ateneum, Finnish National Gallery in Helsinki features works by Finnish photographers Elina Brotherus (b. 1972, based Helsinki/Paris) and Hannele Rantala (b. 1952) who, alongside their independent practices, have been making work in dialogue together for over two decades. Through this tandem creative approach, Brotherus and Rantala offer their individual reflections on identity and the role and status of women artists in today’s world.

Typical of the duo’s working method, the photographs in the exhibition have been made in response to themes, quotes and assignments that the artists have set each other. The new works created in response to these assignments reflect each of the artists’ particular styles: while Brotherus is noted for her witty self-portraiture and autobiographical references, Rantala takes a more poetic approach. Taken together, the works are a celebration of individual expression, reflecting on personal experiences and the subjective nature of art and creativity.

Assignments include tasks based on quotes by Yoko Ono and Erwin Wurm’s one-minute sculptures. One of the assignments that recurs throughout the exhibition is ‘Choose works by forgotten female photographers and make a parallel work’: this sees the duo take inspiration from a variety of unknown or forgotten women creatives across literature and the arts, from Nordic poet Edith Södergran to photographers such as Hilja Ravinemi and Emmi Fock.

The exhibition sees Brotherus and Rantala questioning the canon while honouring the influence and importance of women artists. Running concurrent to this contemporary exhibition, Ateneum also presents The Modern Woman, a celebration of twelve pioneering Finnish women artists and their contribution to 20th century modernism. Following these exhibitions, the museum will close for refurbishment, and museum director Marja Sakari will oversee a rehang of the permanent collection to open up the art historical canon.

Elina Brotherus (b. 1972) graduated with a Master of Arts degree in photography from the University of Art and Design Helsinki in 2000. A prominent member of The Helsinki School, her works have been shown in multiple solo and group exhibitions throughout Europe, Asia, North and South America. The artist has been awarded with the Prix Niépce of Gens d’Image (France) and the Finnish State Prize for Photography (Finland), and her works are included in numerous collections such as Saatchi Collection, London (UK) and Hasselblad Center, Gothemburg (SE). She lives and works between Helsinki and Paris.

Hannele Rantala (b. 1952) studied at the Helsinki Free School of Art and then trained in photography at the University of Art and Design Helsinki, graduating in 1979. She has lived and worked in France, Belgium and Russia, and her work – which comprises conceptual art and performance as well as photography – has been exhibited internationally. Her forty-year career was the subject of a retrospective at the Finnish Museum of Photography in 2015.