At Home With Elliott Erwitt 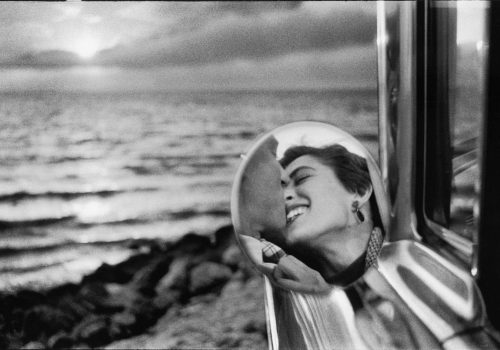 The Holden Luntz Gallery recently shared the documentary At Home with Elliott Erwitt. Produced and directed in 2013 by Jackie Holland, it was first shown at the Point Conference in May 2013, in London.

In this video, Elliott Erwitt’s goes back on the influential career. Shot in New York, the photographer discusses joining the Magnum agency, meeting Edward Steichen, Robert Capa, and Roy Stryker. While the footage presents Erwitt’s most famous pictures and interior views of his studio, the photographer speaks on the trajectory of his career. Erwitt recalls beginning his career with Magnum and of the positive impact of keeping the copyright to his work. On how viewers find his work funny. Additionally, he speaks of working on a book a year and the pleasure of seeing his published prints.
Erwitt was born in Paris in 1928 and spent his childhood in Milan before moving to the United States in 1939. The son of Jewish immigrants, Erwitt, lived in NYC for two years before attending high school and college in Los Angeles. While in Los Angeles, he was first exposed to photography in a commercial photography studio. Then he went on to study filmmaking and photography at Los Angeles City College. In 1949, he returned to Europe to pursue artistic photography, where he traveled around France and Italy. In 1951, Erwitt was drafted in the U.S. Army and again took the opportunity to photograph Europe, specifically France and Germany.
Erwitt eventually returned to New York, where he was to settle and met Robert Capa, Edward Steichen, and Roy Stryker, who would become guiding mentors for Erwitt. Stryker was the director of the Farm Security Association’s photography department, and he hired Erwitt to work on a photography project for Standard Oil. Erwitt would then start a freelance photography career working for such publications as LIFE, Look, and Collier’s. Early in his career, as a young Magnum photographer, he recorded many of the 20th century’s most meaningful events. He captured people such as Marilyn Monroe, Nikita Khrushchev, Richard Nixon, and Che Guevara. Robert Capa would later induct Erwitt into Magnum Photos, and Erwitt would serve as president of the organization for three terms starting in 1968.
At Home with Elliott Erwitt
Executive Producers: Robin Richmond, Georgia Fendley, Tim Fendley
Directed by Hudson Lines
Interview by Patrick Baglee
Produced by Jackie Holland

A film commissioned by POINT Conference to premiere in London, May 2013.