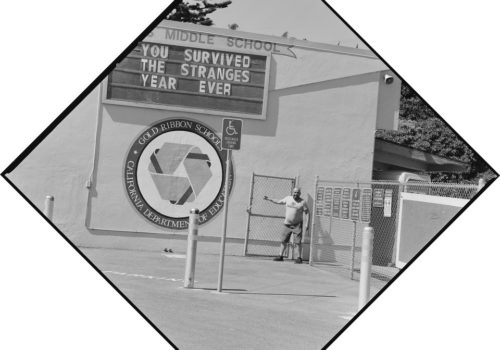 It’s great to hear from a photographer you liked that seemed to be gone.

This is what just happened with Arthur Tress the American surrealist photographer, Arles star in the 70s and 80s, friend and accomplice of Michel Tournier.

These images and text appeared on the screen:

In March of 2020, I began looking for an appropriate Covid project, and I thought I would try and photograph the complete shutting down of many of the local schools in the San Francisco Bay Area.

It seemed to be comparatively safe, as often when I arrived masked to do the shoot, after finding the schools on Google maps, the institutions would be completely deserted with myself as the only person on the premises for hours at a time, or until a surprised custodian or irate security guard chased me away.

Most of the time,I would have to shoot through the chain link fences surrounding the buildings, but often the exterior school grounds were still partially open to the public, so I could gain access to the entire campus areas without a problem.

These vast empty spaces had an eerie almost De Chirico like surreal feeling, as they seemed suddenly deserted and quickly abandoned ,with desks or chairs scattered helter skelter in the school yards, alongside class text books left in rain soaked cartons.

The’ ecological’ school gardens had become quickly overgrown with weeds due to neglect while athletic fields were a chaos of piles of goal posts and forgotten baseball equipment.

The occasional bits of sweatshirts ,caps, children’s drawings, or play toys that had been left forgotten in the odd corner.

Vast empty parking lots were sealed off by ‘No Trespassing’, ‘Campus is Closed’, warnings.

Electronic announcement bulletin boards still blinking out to no one, had messages of a forlorn hope: ‘We Miss You’, ‘See you in September’.

It all gave an impression of the aftermath of a disaster film …a Chernobyl at our doorsteps…a silent condemned location quietly waiting perhaps for the exiled students to return eventually someday.

As I proceed with the project, I became aware of certain social inequity implications. It became soon obvious the schools in economically deprived areas were more seriously run down and decrepit, with broken windows, peeling paint, or garbage uncollected, than those in the more wealthy upscale parts of the Bay Area, while the many private and Catholic schools, which the majority of students in San Francisco now attend, were either still open or pristinely maintained, almost like resort hotels.

But also, the assertive social issues of 2020 impinged even through the locked school gates.

There was the ‘Black Lives Matter’ movement that might use, in several instances, the outer school wall or fences as staging areas for home made protest posters or flower memorials.

While many schools became the temporary polling places for the hotly contested election of that controversial decisive year.

Also, after a few months, these academic grounds, which tended often to be beautifully landscaped, were stealthily being re purposed by the neighborhood locals as spontaneous recreation areas for jogging, biking, dog walking, improvised playgrounds for overly energetic kids,, and ‘ pop up ‘ family picnic sites, and gradually these masked intruders entered the edges of my compositional frames.

Strangely now at age 80, it was almost a circular return to my earliest work ‘The Dream Collector’, much of which was produced in the same kind of desolate learning environments, but this time without the children.

At the same time the empty hollowed out feelings these locations evoked perhaps mirrored my own inner emotions of loneness and isolation common to the elderly, but also ironically these sparse images reflected a certain Zen like peacefulness of the dissolved inner Self of a meditative old man.

As time went on, I visited more then 100 schools, colleges and universities within about a 200 mile radius from San Francisco over a 12 month period from Sebastopol to Pismo Beach.

I still use my original analog Hasselblad camera and shot more then 1000 rolls of Tri-X film during the year.

Also, I decided to use an unusual ‘diamond’ shaped format, as for me, it suited best the sharp angular geometries of these institutional buildings and also gave a certain sense of ‘ askew unease’ to these sometimes disturbingly ultra quiet images.

Now as the schools begin to slowly reopen, I’m am hoping to make it into an exhibition and find a book publisher, that might provide a permanent document of this “stranges year ever”.