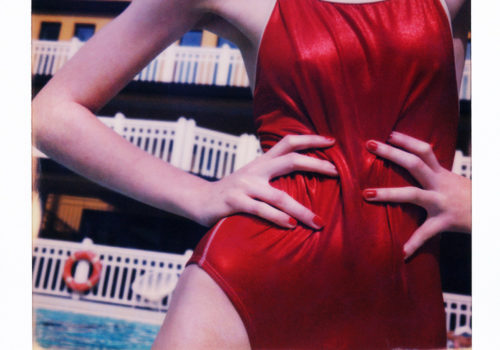 First official photographer of the newspaper Le Monde with which he collaborated for more than 20 years, the photographer Gil Rigoulet was exhibited for the first time in 1986 by Robert Doisneau who presented his images in Photo Magazine. Christian Caujolle then exhibited him at the Deligny swimming pool for “Living in a swimsuit”, alongside Joseph Koudelka, Marc Riboud, William Klein, Helmut Newton, and Jacques-Henri Lartigue. His work has been featured in numerous exhibitions at the Rencontres d´Arles, in Paris Photo (Agnès b), or by the Montparnasse Museum and is published regularly in the international press.

Gil Rigoulet is mainly known for his Street Photo from the 70s and 80s taken all over the world. Considering water as his natural element, he immersed himself in the world of swimming pools in the 1980s and began this series-fresco “Body and Water”. Stopped by the bans on taking photographs in chlorinated pools in 2000, he continued this series in Polaroid in 2014, a nod to the 80s, from the Molitor swimming pool to other private pools, and became French ambassador for Polaroïd Originals.

“The swimsuits shine, the sequins come in and fly in the spirit of Pool Parties. ”

A loyal friend of the iconic bookshop – gallery, he once again takes over the premises from May 6 to June 13, 2021 with “La Piscine”, a colorful exhibition in Polaroid format.

A testament to the lifestyle and freedom peculiar to the 80s, which are so dear to him. Water and bodies assembled under the sun and Gil Rigoulet’s lens as if to help us remember what we are deprived of and which we will nevertheless soon find again.

“Pola Pool is a nod to the 1980s, a counterpoint to a bygone era when I could freely take pictures in public swimming pools. My black and white photos from the 80s to 2000s are relegated to the rank of testimony from another era.

All these freedoms have been diluted in regulations, bans, image rights … swimming pools have changed their functions, places of sociability, meetings, pleasures and relaxation, they have become places only for swimming … where we swim in single file.

The image is square, in the washed-out hues of the Polaroid. An aesthetic dive into the 80s, a look of great proximity, intense, sensual, provocative. The swimsuits shine, the sequins are invited and fly in the spirit of the Pool Parties.

I compose my images for tens of minutes and often only take a photo with taut graphics and millimeter framing. ”