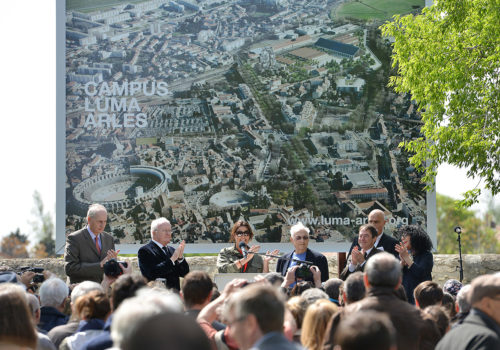 What we experienced in Arles this weekend was a rare and wonderful thing. For a moment, everything seemed possible, everything was alive, everything came together and the stagnation that had prevailed in the city was dispelled.

Friday was the opening of the Fondation Van Gogh by the Swiss philanthropist Luc Hoffmann, who has supported environmental initiatives in Camargue for decades. The foundation is a sublime location thanks to the architects Guillaume Avenard and Hervé Schneider, and a dozen works of the painter, on loan from other institutions, are currently on display.

Saturday was the opening of the Solaris exhibition, which introduced the public to the most significant achievements of the architect Frank Gehry, who oversaw the sweeping renovations of the SNCF workshops here.

An hour later was the symbolic laying of the foundation stone which will one day turn Arles into a unique contemporary art center in Europe. For Maja Hoffmann, Luc’s daughter, who is behind the project with her foundation, Luma, this was the end of a 10-year battle.

There were several touching moments, including the speech by Rolande Schiavetti, the wife of the city’s Communist mayor, herself the daughter of a railwayman. She spoke of her father’s joy at finally seeing the city’s industrial ruins reborn. Behind her, ten veterans of the railway union’s struggle were moved to tears and applauded wildly. And there were surprising moments as well: a speech by the local Socialist deputy Michel Vauzelle, praising the coalition of communists, socialists and Swiss philanthropists to transform the city. Then there were the comic moments, as when a local band played “La Cucaracha” following a composition by Pierre Boulez. And, finally, the unusual moments: at every opening, the crowd was as diverse as it was passionate: the locals, the cream of the crop in contemporary art, the major philanthropists from German-speaking Switzerland, as well as personalities like La Baronne Maria Lambert, Franz Wassmer, the auctioneer Simon de Pury, or the director of London’s Tate Gallery Nicholas Serota…

There was a gorgeous reception at the Frères Prêcheurs church, a sumptuous lunch at Alyscamps, an after-party at Le Galoubet, the city’s best restaurant, where Frank Gehry’s assistants danced on the tables until six in the morning. All the little quarrels were forgotten as memories of the past, the 200,000€ given to the director upon his leaving , the resignations announced, retracted then re-announced by the president of the Rencontres d’Arles, of the four candidates selected by the festival directors (whose final decision will be announced April 16th): Christine Ollier, François Cheval, Sam Stourdzé and Julien Frydman, only the latter was present.

The weather was lovely this weekend in Arles. Lucien Clergue was in high spirits. Maryse Cordesse was radiant. It was  great to experience such a moment in this resurrected city.

With a Communist mayor, a Socialist MP and a big Swiss family, it was the perfect Republican front!

And just to anticipate the objections of any perverted minds out there: Maja Hoffmann is indeed one of the biggest supporters of L’Oeil de la Photographie, but even if she were not, I would have written exactly the same thing.

Arles : 48h of Happiness and Celebrations