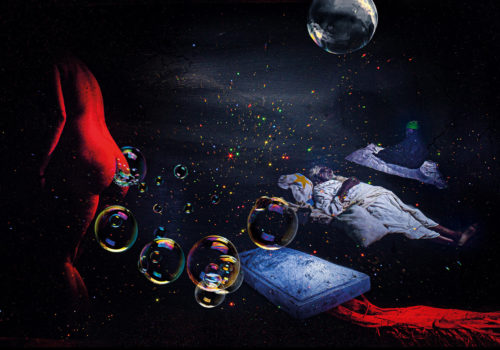 “The Rabbit Hole”, which can be translated into French as “On the other side of the mirror”, in reference to Alice in Wonderland and the passage from our reality to another world, is the result of the collaboration of Boris Eldagsen and Tanvir Taolad, one in Berlin, the other in Dhaka. The series invites you to break free from the norms of your thinking, to visit spaces where inside and outside meet, here and elsewhere, the conscious and the unconscious, heaven and hell. This four-handed work brings together Western and Eastern perceptions of the great unknown: Us.

This work does not deal with social questions or political problems, but with the genesis of all questions and problems.

This work does not deal with religion, it embraces all religions. It is about the past, present and future human condition. It is about our timelessness, and its underlying circumstances of suffering and hope.

Boris Eldagsen & Tanvir Taolad work mainly from their archives. They use their technical skills and their taste for experimentation to merge their respective photographs, and thus create images that deepen the exploration of the human condition. The images are mainly modified manually, with digital only intervening in 25% of the process. They are cut, destroyed, projected, glued, then digitally reworked. As an image undergoes several cycles of alteration and Boris Eldagsen & Tanvir Taolad not revealing to each other the processes used, no one really knows how the images were made.

The installation presented in Arles was never shown until now.

“The photographs of Boris Eldagsen and Tanvir Taolad take us to the other side of the mind, to the outskirts of the universe.

We don’t know if we are seeing the artist’s dreams or a mirror of our deepest state of consciousness.

These images from the Rabbit Hole series are truly unique, unforgettable and above all, powerful. ” – Roger Ballen

The exhibition is presented in its entirety during the opening week of the Rencontres, then in a condensed version until August 29.