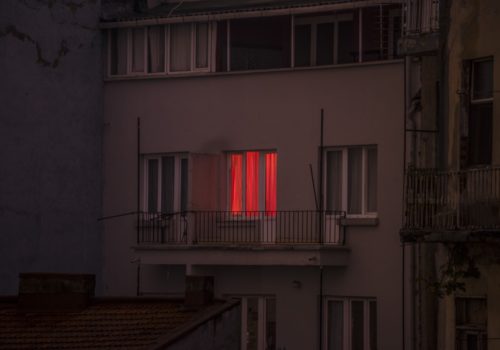 The Rencontres d’Arles allows the exploration of a variety of documentary languages, ranging from clearly formulated projects to works using image as an abstract support to meticulous research.

Those arriving by train might begin their visit with the exhibition of Mathieu Pernot at the Maison des Peintres. Developed in two stages, in 1995 and in 2013, the series Les Gorgan portrays a Roma family, and fuses timelines, archives, and documentary components to construct a brief history of the community. By setting the mug shots dating to their confinement in a concentration camp next to family portraits taken almost twenty years apart, Pernot gives visibility to people who are often stigmatized, and underscores the cruelty of social policies.

Some visitors may decide to walk over directly to the Ateliers SNCF, the former railway warehouses, and explore the spectrum of possibilities across two locations and five exhibitions. The Atelier de Mécanique features a historical exhibition of works of the DATAR (Interministerial Delegation of Land Planning and Regional Attractiveness). In the tradition of Mission Héliographique — or even commissions by Ottoman sultans curious to know more about their vast empire — this photography project, carried out by over thirty photographers, aimed to “portray the French landscape of the 1980s.” The originality of the exhibition lies in the presence of personal archives, shown to the public for the first time and offering a behind-the-scenes look at the production of these legendary images.

In the same building, the Prix Découverte exhibition showcases two projects pushing the boundaries of documentary photography. The researcher and artist Mari Basashevski dismantle the relationship between governments and corporations in the context of international conflicts. While photojournalists tend to document world events as they unfold, Bastashevski investigates the way in which the information vacuum maintained around this topic by the privileged elites helps support the industry. To build her argument, she uses photography in a formal and non-stylized manner, as a nomenclature tool free of sensationalism. Guy Martin, in turn, denounces the despotic moves of Tayyip Erdogan in Turkey, deploying an aesthetic that borders on fiction.

Next door, the Magasin Electrique hosts two exhibitions that draw a similar parallel: between a collective topological inquiry and investigative journalism where the image departs from news reporting imperatives. The first exhibition, entitled Levitt France: A Residential Utopia, looks back at an ambitious project conducted in the early 1970s involving the construction of American-style suburban neighborhoods around the Ile-de-France. It presents a vision of a particular lifestyle as seen by five photographers between 1973 and 1995. The corresponding exhibition by Mathieu Asselin investigates the company Monsanto’s hegemony in the field of agriculture as a leader in GMOs that expands aggressively in complete disregard of human rights and the environment.

Now it is time to take a break and enjoy a lunch of healthy, locally grown foods, for instance at Caravelle, located near the wharves, which specializes in wedge shells. From there, the documentary photography tour resumes at the nearby Commanderie Ste-Luce, where we can see Syria through the eyes of the young photojournalist Samuel Gratacap in his series Fifty-Fifty. Curated by Marie Sumalla, who had confidence in this photographer from the start, the exhibition reminds us of the far-reaching scale of the war, from local fighting to population displacement. The series as a whole, done in a nuanced language, is above all a research project on the representation of geopolitical issues.

The next stop on our tour, Guillaume Herbaut and Eleonore Lubna use a dialogic format to address another conflict, the one ravaging Ukraine. On one side, the front; on the other, portraits of people fleeing it. The project shares space at the Palais de Luppé with the work of Alex Majoli who, since his debut, has constantly redefined his style as a way of expanding the boundaries of photojournalism, to the point of staging reality in order to better embody it.

Before rounding off the day with an aperitif at the Place du Forum, there is one last stop on the tour: the Salle Henri-Comte where we can see the work of the American master of color and street photography, Joel Meyerowitz, in a series of the artist’s original prints.

Laurence Cornet is a journalist specializing in photography and an independent exhibition curator. She divides her time between New York and Paris.