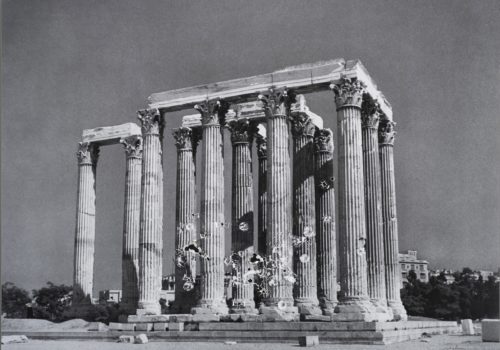 The history of Arles goes back to antiquity. And yet, ancient as it may be, the city is a bit short on mythologies. Great displeasure , Arlesians, spare me from your wrath. The city does possess its Alyscamps, a Roman necropolis. The city squares come alive with tales and reenactments during the Arelate festival. The Rhône caresses the Museum of Antiquity, while Paris has abducted its Venus. But there are no myths, beliefs, folklore; and more so Arles lacks the greatness of a given site . With Dune Varela’s exhibition, Toujours le Soleil, Arles has finally found a way to reflect on the representation of its legendary sites. What’s more, the artist explores, in broader terms, the everlasting nature of photography and wonderfully plays with images.

In her earlier works (Icebergs I and II, Constellations, White Storm), the forty-one-year-old photographer sought to show the “collective imagination” of natural and built spaces. Toujours le Soleil is a continuation of the previous projects, even though the format has changed. The exhibition shows a collection of representations of sacred places, such as temples, which have become “vestiges, backdrops, tourist sites, spaces of representation and learning.” Varela’s presentation of these places, however, challenges their use. The image of a temple is more meaningful than the temple itself.

It is precisely this system of representation that the photographer explores and plays with. A temple is being manipulated, photographed, rephotographed, captured from a screen display. The image multiplies, transforms. First carved in stone, the image of a temple is shattered. Antiquity withdraws into the distance. The myth is far away. There remains a correspondence between these ruins visited as a proof of the past, and the finite character of photography.

Thus the viewers have before their eyes the photograph of a statue splattered with paint; next come fragments, scraps of pictures cut abruptly and photoshopped onto the pottery. The image of a colonnaded wall comes to a halt at a smashed stone. The form prevails, tells us Dune Varela. But this form is manipulated. The image has taken a blow. “I wanted to destroy, to deconstruct. Fixing is inherent in the photograph: it captures. I wanted to produce something more raw, take a leap into the unknown with the material by accepting its accidents, even provoke them.” (Toujours le soleil, interview with Manon Lutanie, Éditions Trocadero.)

Dune Varela wants to show contraries, opposites, the reverse: “Nature/artifice, preservation/destruction, revelation/disappearance, content/container. All these forms of representation raise questions about humanity, what it is to be human, our relationship to time and nature.” Varela wants to “experiment. By using multiple formats, media, and materials, [she] questions the materiality of the image and its form of representation,” she notes.

The photographer has thus plumbed the depths of photography. She has gone back to the “origins of photography,” even while “deploying its materiality to explore new avenues.” The blend of different media becomes a game. She breathes new life into old glass plate negatives, and dusts off long-forgotten images. Vintage black-and-white negatives, photography collections, and anonymous images thus find their way into Toujours le Soleil. The photographer aims to show “the traces of what used to be.” She raises the “question of the physical disappearance of the image, the ideas of permanence, plasticity, and two-dimensionality of photography.”

More than anything, the photographer offers us a daring, and very pleasurable, interchange between the past and the present, antiquity and contemporaneity, form and substance, the suns of yesterday and the light of today, freshly printed photographs and vintage images. Toujours le Soleil deals with contraries, and in this game of opposites, it raises questions about history, the present moment, about loss and erasure. The Eye of Photography captures these shards and fragments, and thrives on the curiosity about our world.

Arthur Dayras is a writer specializing in photography. He lives and works in Paris.