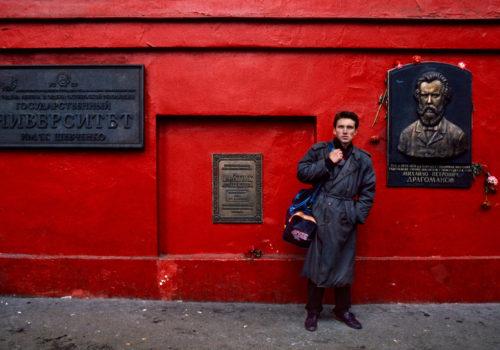 Until October 1, 2022, the Municipal Archives of the city of Lyon will host the third exhibition of photographer Philippe Schuller. A founding member of the Lyon-based agency Editing, his protean work deals in turn with French society, urban transformations, particularly in Lyon, the art of portraiture, or bears witness to the beauty of the world. His many sided work seems to be at the crossroads of documentary and poetry, and also marks the transformations of photography, between personal projects and press assignment. The French photographer has wandered in Ukraine a few times. Here are his memories.

Arthur Dayras (A.D.): The first part of the exhibition at the Lyon Municipal Archives is devoted to Ukraine, which you visited twice in 1991 and again in 1993, after the fall of the USSR. What memories do you have of it?

Philippe Schuller (P.S.) : It is an extraordinary memory, an equally extraordinary reportage. When thirty years later, these photographs reappear, the current context makes them very strong… It is Mourad Laangry, co-curator of the exhibition, who is behind this exhibition within the exhibition. When he saw my archives, and all these photos in Ukraine, he said to himself “it would be nice to show Ukraine apart”. The events of March 2022 came after this decision. In 1991 we left with Muriel Pernin (writer, journalist and traveler). She is a wonderful woman, who is still in contact with Ukrainian associations, especially in Villeurbanne. Muriel was already working on this tragedy, the famine of 1932/33 which caused between 4 and 5 million deaths (the Holodomor in 1932) an event not recognized by the League of Nations predecessor of the UN. It did not exist or existed at the margin. We started taking photographs of Ukrainians here in Villeurbanne, portraits of the diaspora. But we quickly realized that to do a serious job, we had to go on the scene of the tragedy. On the spot, a young student, Ania, became our guide and our friend. When we arrived at the airport, it was the Soviet atmosphere… guys in military uniforms with machine guns slung over their shoulders. The buildings were of typical architecture, some decorated with the red star. I had the impression that these people were blocked by a glass ceiling. They didn’t know anything about what was going on elsewhere. They did not yet have the desire for the West. Propaganda was working hard. After a lot of investigation through parallel channels, we managed to meet witnesses of the famine. Their testimony was terrible. I photographed them at home in their family environment.

I returned to Ukraine in 1993, I was able to visit the shipyards in Odessa, which was unthinkable in the West. We could walk around wherever we wanted. I felt like going on board an old ship. Yuri, the captain of the old tanker in repair, welcomed us with sympathy. He served us vodka, we ate, we discussed while Ania translated for us. The discussion seemed to be nice. He was rather benevolent. Ania ended up discussing with him, in Russian. I ask her what they said to each other and she told me later that the commander questioned her: why did she bring these people? They should not come. They should stay among themselves, he had a real hatred against us… There was always this mistrust, which disappeared little by little after 1993.

We were able to meet politicians, resistants to the Soviet hold, who were nationalists in another sense than the one understood by the extreme right, which for years, tried to make Ukraine recognized as an independent nation. This national feeling was still very much stifled. The Holodomor of 1932, wanted by Stalin, was moreover created to suffocate this form of nationalism.

A.D.: While you were there, you told me about a major problem that is hard to imagine today in the digital age: sending the films.

P.S.: What is also fascinating today is to know that you could spend three weeks making fifty films without seeing any of the pictures. If you screwed up a diaphragm, the pictures we ruined. At that time, we were very precise. There was very little waste. Film was a sacred thing. If you lost it, everything was ruined. In the left pocket the blank films and in the right the used films. Muriel reminded me of an anecdote, in Kiyv by an incredible chance she met a friend from Villeurbanne who was returning to France the next day. I gave him my films and the agency was able to recover them 2 days later.

(When we were working on the news in Lyon, we would drop off the films at the lab in the evening and pick up the slides in the morning at 6:30. A quick edit, a short caption and then off to the train station for a TGV shipment. At 10am the films were in Paris. We were competitive)

A.D.: What memories do you have of post-Soviet Ukraine?

P.S.: Some anecdotes… One day we were in Yalta and there was on the other side of the “border” Sevastopol, a forbidden city. We were looking for someone to smuggle us across and we found a cab ready to do it. “No problem, I’ll take you”. We went through the small roads, a small path that bypassed the guard post over the hills. Then we returned on the main road once the post passed and pow, we fell nose to nose with the militia. And there, we did not laugh

Philippe Schuller, Photographs
An exhibition curated by the artist, Marie Maniga and Mourad Laangry
At the Lyon Municipal Archives
From March 4th to October 1st 2022
Website of the Archives Municipales de Lyon