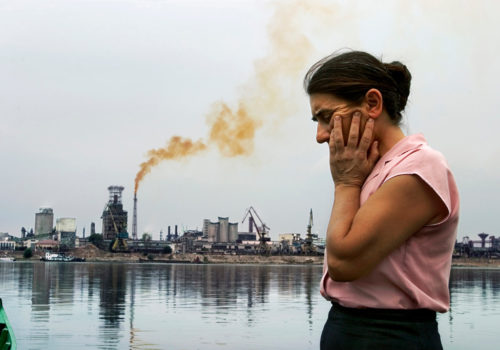 Until October 1, 2022, the Municipal Archives of the city of Lyon will host the third exhibition of photographer Philippe Schuller. A founding member of the Lyon-based agency Editing, his protean work deals in turn with French society, urban transformations, particularly in Lyon, the art of portraiture, or bears witness to the beauty of the world. His many sided work seems to be at the crossroads of documentary and poetry, and also marks the transformations of photography, between personal projects and press assignment.

Arthur Dayras (A.D.) : Philippe Schuller, this is not your first exhibition at the Lyon Municipal Archives. There was notably the one on the Cité Mignot (Long live the Cité Mignot!, 2018) and the one devoted to Lyon’s businesses and artisans of the past (2014).  These two exhibitions have given you a long-term view of Lyon.

Philippe Schuller (P.S.): I am not a real Lyonnais, but I know my city, if I may say so. The first exhibition in 2014 was a sign of change. The arrival of the metro in Lyon with the opening of the A line in 1978 was an upheaval. For example, before, you could drive around the Place des Terreaux. It was the kingdom of the car. Today it is pedestrian and half closed to traffic and it is much better.

For the 30th anniversary of Géo, I was able to document the transformation of this city, by photographing 30 years later, various places in Lyon. For example, the banks of the Rhone, which at the time were full of cars.

A.D.: The beginning of the current exhibition starts with a set of brochures, press titles and journalistic reports that were entrusted to you. You worked for Lyon-based media, national dailies and specialized newspapers like L’Équipe. How did it work?

P.S. : Most of my reportages were done thru the agency Editing, of which I was one of the founding members, created and directed by Serge Challon in 1988. Serge had gathered the photographers of Lyon in the same framework and I was able to join it. Serge’s brilliant idea was to go to the Parisian magazines with this simple proposition: if a Lyon photo agency was created, would you be interested? We received commands quite quickly, mainly because we offered these magazines another vision than the Parisian one. The agency was the link. But that didn’t stop me from doing independent, more personal reports.

A.D.: For L’Équipe, you followed young rugby players from the edge of the field, a report that was ultimately insignificant but which exuded great tension and emotion.

P. S. : This report was also an idea of Serge Challon. His son was playing with the team of the Victor Grignard high school in Lyon. His team was playing the final of the French Elite Rugby School Championship against a high school in Montauban. I didn’t know anything about rugby, but I followed them for several months to get a complete picture. This is certainly what gives the series its depth.

A.D.: You could be described as an “in depth” photographer. The example of your series on Lyon’s hracetracks is a good example. For many years you photographed horses and grooms, races and betting, all this unknown universe. These projects are opposed to the short time of the assignments, to the imperatives of the press.

P.S.: The assignments always concerns a single subject. You never know the result. I have done a number of small subjects that have worked very well. Both feed off each other. The first non-commissioned subject that I was able to do was the one of the local shops (exhibited at the Lyon Municipal Archives). Another striking subject was the Champ Fleuri Clinic in Décines, in the suburbs of Lyon, an institution that was ahead of its time and that advocated painless childbirth. I was able to document these deliveries for the first time, directly in the operating rooms. I loved photographing the hospital world.

A.D.: These are quite complex places to photograph though, with a uniform and harsh white light, omnipresent, almost aseptic.

P.S.: Oh, the problem with light is when there is none. The clinic would call us at 1:00 a.m. because a woman was in labor.

A.D.: Did these women agree? It is however a rather sensitive subject, very intimate.

P.S.. They were a bit green, they didn’t care about this issue. And that gave very beautiful photographs, without flash, with indirect light. Another of my personal series was one devoted to an association of integration through housing. This series has disappeared and I only have the slides. I went to see these people who lived, for many, in insalubrious housing. One day, we went to a building where Algerian immigrants were living without water or electricity, because the owner who was housing them wanted to evict them. I remember the picture of a man in his bed. It was so sad. I brought him his picture, as I usually do, and he looked at it. He turned his head and I saw him crying.

P.S.. No, no, no, I continued to give out photos, but I was careful that the image did not hurt people. Fifteen years ago I did a report on obesity. It was noted that in France obesity was constantly increasing, which is why I decided to make this reportage. Today, it is a less divisive subject. Obesity is now better understood, better known. I accompanied an obese trucker, in his truck, from Paris to Auxerre. I followed him in his truck, we went down to Auxerre, he unloaded his merchandise, despite his 196 kilos. Very nice for him that he was able to do it. And then we went back to Paris, we arrived at 5 am. I photographed him driving his big Citroën SM home. He had tried the first gastric bands, a medical technology still in its infancy, to lose weight. A few months later, his wife called me. She said, “He’s dead. Can I have the pictures?

A.D.: Tell us about the Cité Mignot in Lyon. This one is quite similar in spirit to the series photographed by Ito Josué on the architectural ensembles of Firminy, in the Loire, built by Le Corbusier. We find in both of them this will to photograph the habitat as close as possible, to show the imposing frame of these habitats, and the arrangements, of the interior, the decoration of its inhabitants, in this same constraining frame.

P.S.. I was very happy with this work. I put a lot of effort into it. I think I succeeded in doing what I wanted to do and yet I regret that so few people participated. There were 150 homes and I had to meet and photograph 25 people. I could have done a hundred more, but there is this reticence in Lyon, or a desire for discretion. But despite everything, the series shows surprising profiles – like this opera singer on the cover of the book or this South American woman who had a magnificent complicity with her son. At first, this young woman refused to have a picture taken, but after a while, after thinking about it, she accepted.

I will tell you about my very first portrait. It was the son of a lady my wife knew, a young sailor. The session took place in his room, I arranged a background and tried to cobble together a flash with layers to soften the light. I was not really comfortable. He was fidgeting with his bag. He kept asking me questions. He started again with his bag. That’s when I said to myself “but photography is not only technic”. You also have to talk, answer questions, I hadn’t thought of that.

I think that a good portrait photographer is the one who manages to show the true personality of a woman or a man, beyond the facade that he or she presents at the time of the shooting.

Another anecdote. I went to Geneva to photograph a banker. For a portrait session, I needed a lot of time to prepare. Ideally, the best thing is to find the location, to choose the right place, to try different angles. But he was in a hurry and I had to adapt. I spent trice the time in location scouting than in the shooting. It took all morning but I only took a minimum of his time.

The portrait is a bit of a gamble. You don’t know where you’re going to end up. You can meet great guys, with whom you have a great connection and not make a good photograph and vice versa. In the end, I do photography to see behind the mountain, to go to the other side of the wall, behind the door, where one should not go.

Philippe Schuller, Photographs
An exhibition curated by the artist, Marie Maniga and Mourad Laangry
At the Lyon Municipal Archives
From March 4th to October 1st 2022
Website of the Archives Municipales de Lyon