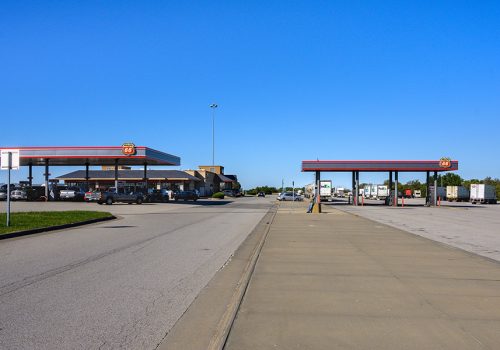 The light is good here. In October the sun is not so deep overhead and there are long mornings and deep afternoons that give shape to the landscape. There are fields and rolling hills and miles and miles of dirt roads that take you to places little seen. Then there are the towns. Hundreds of them, each with its main street and a few blocks of houses spread around, each unique in its own way, almost all alike in that they are shrinking.

Kansas came to life, its American white man’s life in the mid-1800s. Pushing the Indians aside the new American settlers tore up the prairie, threw down railroad tracks and built small settlements every fifteen miles or so, places where farmers could bring their grain and send their children to school. The towns prospered as long as farming was the work of families and muscle supplied the labor. Then machines came, and farming got bigger, the work of combines and capital and the small farmer was pushed aside. We liked the results, we city people. Cheap food and plenty of it was a lot more visible to us than the farmers leaving their land and the towns slowly shrinking.

The unplanned economy worked in its own unplanned way. Where there is no work, no money, no meaning the people go away. Those who stay behind have something that holds them, family, the work that remains, love of the land. There is much beauty here even if knowing the story tinges it with sadness.

I came to Kansas knowing nothing. I like to begin a story with just my senses. I wander and look and feel while I take pictures not knowing what they represent. After a while patterns emerge, and conversations with strangers along the way begin to fill the vast space which is ignorance.

I came to Kansas knowing nothing and I only know a little now. Just what can be seen in a week and gathered from new friends and learned from books. These pictures are the result of my lifetimes understanding of life, for better or for worse, and now some feeling around on new and different ground. Don’t read them as the definitive statement, only a pin in the map to mark the beginning of a journey.

A moment now to beg your indulgence. The text that follows describes something of each picture, but the format of L’oeil does not permit me to put text and picture together as I would prefer.  So I am asking you, the reader to do that for me please. Look at a picture, then read the text or the other way if you prefer. Either way, taken together they will bring better understanding.

Phillips 66 – I began with this gas station both because it was familiar to me as a type and as a telltale for the American West. I know well the giant concretescapes with their separate fueling station set aside for the big rig trucks, the immense spaces devoted to easy on, easy off, and the lone man waiting for someone to take him away. To get to the small roads I love, the journey began on the big roads that lead away from the city.

The Volland Store – This picture tells one story but misses another. I had gone to a gallery called the Volland Store to photograph a showing of vintage motorcycles. A hundred miles from the nearest big city, eight miles from even a small town, when I took this picture it was to illustrate the open space the gallery was situated in. In the picture some people are sitting, talking to one another and listening to a football game on the radio. A year later I heard a different story. Lila, the woman on the left brought a portable radio to listen to the game. They are sitting so far away from everybody else because that’s the place they found an outlet where they could plug the radio in. They are sitting on good wooden chairs they have brought out from the gallery without asking and later they will have to clean the mud from the chairs and make apologies for taking them out into the field. Fragments of that story are implied in the picture but only with words can you know this. If a picture is worth a thousand words, sometimes a few hundred words can help a picture along immeasurably.

Heritage Prairie – Kansas is where the prairie began. It swept west for hundreds of miles, a vast sea of grass so high that the early travelers walked for days without seeing where they were going. They talked of it as an ocean to be endured and it unsettled them. I didn’t know any of that when I made this picture, only that I was in the middle of what felt like a living thing different than any other I had known.

Dover Kansas – This is what I have come to think of as quintessential Kansas. Tiny towns a respite from the road, quiet and shady places that go on for a few blocks before returning the land to the fields.

Big Bertha’s Diner – Eskridge Kansas – This is also Kansas. Nice people who welcomed me and fed me delicious pie.

Road to Beloit – Between the towns there are thousands of miles of dirt roads, a mesh that connects the people to the fields and to one another. Wheat is grown here and Milo, soybeans and corn. The entire state is crisscrossed by these roads so farmers can gather their crops together for market.

Grain Elevators – Strong City – The roads lead to the towns and in the towns are the grain storage silos and the elevators. I came to know that when I saw a silo on the horizon that there I would find a town.

Sunflower Coal, Wilson Kansas – Where there is a town and a silo there you will find railroad tracks and soon enough trains. All over Kansas if you sit quiet for a while in a quiet place you will hear the sound of a train somewhere in the distance. Any place the train stops you can still find life. But where the train passes by life is only hanging on.

Summit Cemetery, road to Concordia – Where people have lived is where they remain when they die. The fields of Kansas are dotted by small cemeteries, quiet and beautiful. The headstones offer you a tiny fragment of someone’s life and you make up a little more from the absence and what surrounds.

Windom Kansas Evening – There is a desolate beauty here. No artifice, no make believe. The wind blows and the light fades and there is no one around to interrupt your thinking. Here are places that invite your reflection, surrounded by sky and fields. It is a place far enough away that by the time I got there I was sobered by some little understanding of our place in things.

Wilson Kansas, Flock of Birds – thank goodness for the birds. They took me suddenly, unawares. I shot them with the flapping of their wings beating against my heart then instantly they were gone. Seeing this picture again, my heart sings, the morning is alive; I see promise in the air.

Hollenberg Pony Express Station – Only two years in the 1860s, that’s all the time the Pony Express lasted but its imprint on American consciousness remains today. The station stands alone on its bit of prairie as it did when it was new. Only now the prairie is gone and civilization surrounds it for further than the prairie ever did. If you stand here on a quiet afternoon and don’t look too close, you may feel for a moment what the ones who lived here in those days felt, the land sweeping away to infinity, the sky going on forever, their feet planted firmly on the ground.

Andy Romanoff – Pictures From This lifetime

Andy Romanoff – Stories I’ve Been Meaning to Tell You