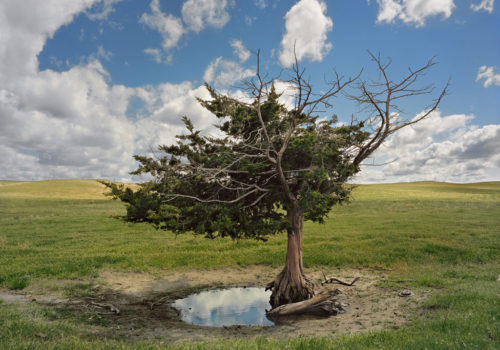 In this book by the photographer of ‘Detroit Disassembled’, Andrew Moore takes to the air to create an intimate vision of the High Plains. The “Meridian” of the title refers to the 100th meridian, the longitude that neatly bisects the country and has long been considered the dividing line between the fertile green East and the dry brown West of the United States.

No longitude in the United States carries the weight of the 100th Meridian. It’s the dividing line that bisects the country almost exactly in half between the green fertile east and arid lands of the west. It’s a land of invisible histories where there is much more than meets the eye.

Yet today, it remains most commonly known as “Flyover Country”.

Photographer Andrew Moore brings this land to life in Dirt Meridian, interlacing its storied past to a vital but uncertain future. Having worked this line since 2005, Moore combines aerial and traditional large-format photography to depict the restrained, almost elusive, terrain, and the stories of families defiantly connected to the challenging landscape along the area west of the 100th Meridian in North Dakota, South Dakota, Nebraska, Colorado, Texas and New Mexico.

Dirt Meridian is in part about the legacy of the settler’s ambition and failure on these arid high plains, as well as the evolving story of this region of the country. In a time when climate change, drought and energy exploration are increasingly at the forefront of national concerns, the book speaks of a land subject to extreme weather conditions, where water and resources have always been scarce.

To capture the expanse of the landscape Moore took to the air in a low-flying plane, using a specially modified, extremely high-resolution digital camera mounted under the wing. Flying close to the ground allowed a perspective in which the intimate seemed conjoined with the infinite. From above, the land is like one endless unpunctuated idea—sand, tumbleweed, turkey, bunch stem, buffalo, meadow, cow, rick of hay, creek, sunflower, sand—and only rarely does a house or a windmill or a barn suddenly appear to suspend the sense of limitlessness. In Dirt Meridian these isolated sites are used both directly and indirectly to address such motifs as drought and plenty, ambition and despair, the eternal and the ephemeral—themes so redolent along this overlooked dividing line of America.