André Kertész : Walking in the picture 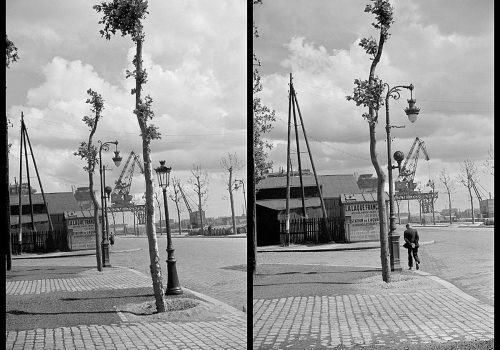 André Kertész (1894-1985) eye opened new paths in 20th century photography. A photography lover at the age of 18, drawing  the aesthetic research of the new vision at age 28, a pioneer of media issues in emerging photographic reportage at age 36, he has largely contributed to the aesthetic and professional evolutions of the medium. But if several generations of photographers have a debt towards his approach and his images, it is for another reason: he is the one who, without effects or display, through constant attention and constant aesthetic subtlety, showed the possibility to pursue serene work throughout a photographer’s lifetime, away from the currents and beyond assignments.

His work, bequeathed to the state by André Kertész in 1984, has since been the subject of many studies, but his 24×36 practice remains indistinct and unknown. In the words of John Szarkowski (curator at the MoMA in New York from 1962 to 1991), “perhaps more than any other photographer, André Kertész understood the particular aesthetic of the portable device and made it manifest.

Kertész had a Leica since 1930. With this camera, the eye of the photographer no longer focuses on the frosted glass but is projected into a frame that is juxtaposed to his field of vision. A viewfinder of a new kind allows the eye to look for its bearings in the image while the body takes its support in space. By taking this camera in the streets of Paris, suburban vacant plots and country roads, Kertész invents in a few seasons a process that will pave the way for many photographers vocations: the photographic stroll. “I took a few steps with it, and I got the picture,” he simply summarizes in front of one of his photos.

A recent and unpublished study on the original negatives preserved by the Médiathèque de l’Architecture et du Patrimoine has made it possible to reconstitute for the first time the chronological continuity of images that the photographer took in 1930 and 1936 with his Leica. Fruit of this research,  the exhibition presented at Maison Doisneau from 22/11/19 to 09/09/20, accompanied by a reference book published by André Frère, proposes to go back to these moments and to observe the few steps of Kertész with those he photographs.