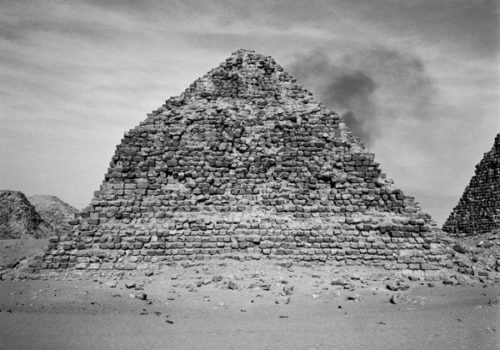 The Abbey of Jumièges in Normandy is showing a selection from two photographic series Time Travel and Nocturnes – Sudan by artist Juliette Agnel at the Logis abbatial, whose work was partly inspired by the photographic production that Du Camp made during his travels to the East with Gustave Flaubert and published in Égypte, Nubie, Palestine et Syrie: photographic drawings collected during the years 1849, 1850 and 1851, accompanied by an explanatory text and preceded by an introduction by Maxime Du Camp, in charge of an archaeological mission to the eastern countries by the Ministry of Public Instruction in 1852.

In his speech of July 3, 1839, before the Chamber of Deputies, officially consecrating the birth of photography in France, François Arago immediately associates the advantages of the technique with the knowledge of Egypt, its monuments and its hieroglyphs in particular.

“On inspection of several of the paintings which have passed before your eyes, each one will think of the immense advantage that would have been derived, during the Egyptian Expedition, from a means of reproduction so exact and so prompt; everyone will be struck by this reflection that if photography had been known in 1798, today we would have faithful images of a good number of emblematic paintings, of which the greed of the Arabs and the vandalism of certain travelers, have deprived the learned world. To copy the millions and millions of hieroglyphs which cover, even outside, the great monuments of Thebes, Memphis, Karnak, etc., it would take twenty years and legions of designers. With the Daguerreotype, only one man could bring this immense work to a successful conclusion. Provide the Institute of Egypt with two or three devices of M. Daguerre, and on several of the large plates of the famous work, fruit of our immortal expedition, vast expanses of real hieroglyphs would replace fictitious or pure hieroglyphs. convention and the drawings would surpass everywhere in fidelity, in local color, the works of the most skilful painters; and the photographic images being subjected  to the rules of geometry, will make it possible, with the help of a small number of data, to go back to the exact dimensions of the highest parts; the most inaccessible of buildings. ”

Cf. Report by M. Arago on the daguerreotype, read at the session of the Chamber of Deputies, July 3, 1839, and at the Academy of Sciences, session of August 19.

Maxime Du Camp and Gustave Flaubert (1821-1880) made their trip to the East between November 1849 and April 1851. On this occasion, the two friends were on an official mission.

Du Camp is the first amateur photographer to obtain an official mission to “explore antiquities, collect traditions, find inscriptions and sculptures and study the history of monuments” (Michel Dewachter and Daniel Oster, Un Voyageur en Égypte vers 1850. Le Nil by Maxime Du Camp, Paris, Sand / Conti, 1987, p. 16.). Thus, Du Camp therefore transmit for himself a mission request on October 8, 1849 to the Académie des Inscriptions et belles-lettres, sent to the Ministry of Public Instruction, which was accepted on October 20. The Report of the Commission of the Academy of Inscriptions, in charge of Maxime du Camp’s instructions, shows that the young man’s photographic objectives are imprecise:

“By asking for instructions intended to guide him on the journey he is going to undertake, Mr. Maxime du Camp announces to the Academy that he is leaving with a photographic camera  to collect on his way, using this wonderful mode of reproduction, views of monuments and copies of inscriptions. (…) ”.

He also got Gustave Flaubert a mission and instructions from the Ministry of Commerce: the writer would be responsible for collecting information on the imports and exports of goods in Egypt, a task which he would very rarely fulfill on the spot.

– As part of their collaboration on the edition of the photographic album, Fonds Emile Prisse d´Avennes at the BnF

Due to the fragility of the 19th century images and for conservation reasons, all the 19th century photographs on display are modern prints, produced for the occasion by the printing press of the Seine-Maritime Departmental Council.